Considering the Legacy of the War at Sunset 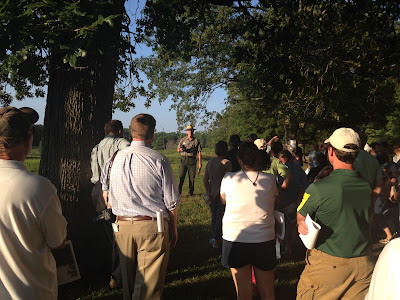 Last night I attended Fredericksburg and Spotsylvania National Military Park's summertime Friday series, "History at Sunset." This week's excellent program, delivered by the park's chief historian, John Hennessy on the Spotsylvania battlefield, encouraged the audience to think about the complicated legacy of the Civil War, the competing narratives of its historiography, and the role battlefields can play in helping us understand the war not just through a microscopic focus on battlefield tactics and soldier stories, but in also presenting the story of the war from a broader view. Hennessy used a pair of binoculars as a metaphor for the challenges of interpreting the war. We often look through the small lenses to obtain a close up, detailed portrait of war, he said; we zoom in on faces and belt buckles. However, doing so can sometimes detract from the larger issues that the combatants fought over - principally slavery. Hennessy encouraged us to flip the binoculars around, look through the larger lenses, and grasp the larger patterns and stories that may not appear so evident at extreme magnification. We must consider both views, he concluded, when interpreting history.

As the audience of about 120 wound its way from the Bloody Angle to the McCoull Farm and back, Hennessy offered several stories that challenged standard narratives of the Battle for the Mule Shoe on May 12th, 1864. Along the way, he argued that no historical event has been more carefully presented to the American public than the Civil War. In the years after the war, individuals in the North and South sought to craft a narrative of the war to facilitate reconciliation. This narrative emphasized that soldiers on both sides displayed honorable virtues, such as courage, valor, and chivalry. It sought to present a simplified depiction of the war, and to downplay the war's complexities. As John B. Gordon once wrote: "The unseemly things which occurred in the great conflict between  the States should be forgotten, or at least forgiven, and no longer permitted to disturb complete harmony between North and South."

The carefully crafted narrative of the Civil War had little room to consider the ultimate cause of the war, human slavery. Yet in the past half century Americans have increasingly questioned the dominant narratives of the war. As new individuals and groups have gained voices through various movements to expand political and civil rights, they have used those voices to challenge old assumptions, and add new stories to our understanding of the war.

It was a beautiful evening on the Spotsylvania battlefield, but also an evening that required grappling with difficult and complicated questions. This proved especially true in light of the public conversations of the last month over the place of Civil War memory in our society today.

Freeman Tilden wrote that the chief aim of interpretation is provocation, and in this Hennessy certainly succeeded. Listen to the entire program, an audio file is embedded below, and it's well worth your time. The original audio file is courtesy of Ted Schubel.