My next story may become quite lengthy, and so I will break it up into a series of at least two posts. Part one will tell the story of the 27th Connecticut in the battle of Gettysburg, while later posts will examine their five monuments.
-----------------------

No regiment at Gettysburg is better represented in stone today than that of the 27th Connecticut of Brooke's brigade, Caldwell's Division, 2nd Corps, Army of the Potomac. The unit had a grand total of 75 men present at the battle, making it one of the smallest commands on either side. Yet today, there are no fewer than five monuments that stand to the 27th in and around the Wheatfield and Rose's Woods. Or to put it another way - one monument per every fifteen men. Technically, my math is wrong:  two of the monuments actually honor individuals of the regiment - Lieutenant Colonel Henry C. Merwin and Captain Jedediah Chapman. So I suppose the correct calculation is 3 monuments for the remaining 72 men, or one monument per 24 men. Still, not bad.

The 27th Connecticut formed in August of 1862, as a nine-month militia regiment. As the federal government struggled to raise the 300,000 men in three-year regiments called for earlier in the summer, a supplementary call for an additional 300,000 nine-month men went out, which marked the beginning of the draft. Principally recruited from the New Haven area, the regiment mustered into service for nine months in October, which means that at the battle of Gettysburg, the regiment was already into its last month of service. Technically categorized as a militia regiment, the unit had full authority to choose its own officers, and elected Richard S. Bostwick as Colonel and Henry C. Merwin as Lieutenant Colonel. It left Connecticut with 829 men.

In December, the regiment fought in the battle of Fredericksburg, and suffered a loss of 19 killed, 86 wounded, and 3 taken prisoner. 16 of the wounded would later die in hospital. The regiment suffered further misfortune in the spring at the battle of Chancellorsville. During the fighting on the morning of May 3rd, the regiment failed to receive word that the lines around the Chancellor House were being abandoned in favor of a new line to the rear. Soon the regiment found itself surrounded, and 280 men, the majority of 8 full companies, surrendered.

As a result of this humiliating disaster, only 75 men remained with the regiment - now commanded by Lieutenant Colonel Merwin -  as it marched northward and toward the end of its service. The 27th and the rest of the brigade commanded by Colonel John R. Brooke marched up the Taneytown Road and onto the battlefield shortly after sunrise on July 2nd, forming into columns by regiment along Cemetery Ridge, near where the Pennsylvania Memorial stands today.

In late afternoon, with the battle raging on the left flank of the army, Caldwell's division received orders to move to the left to reinforce the advanced line taken up by the 3rd Corps. The 27th Connecticut hurried with the rest of the brigade to the Wheatfield. Held in reserve at first as Cross's Brigade and the Irish Brigade moved forward and engaged the Georgians and South Carolinians in their front, soon Brooke's men were called upon to enter the fray. Regimental historian Winthrop D. Sheldon recalled the moment, writing in 1866:


As the regiment enters the Wheatfield, the broken remains of the 3rd Corps are slowly retiring to the rear. A few steps more brings the men under the full sweep of the enemy's fire. Lieutenant-Colonel Merwin falls while leading the command with his accustomed bravery. Under Major Coburn the line still presses forward at double-quick, through the wheat-field and woods beyond, driving the rebels a quarter of a mile across a ravine, which on the further side rises into a precipitous ledge. The men with difficulty clambered up the rocky steep, but as they appeared upon the crest of the hill, the enemy, drawn up in readiness just beyond, within pistol-range, opened upon them a withering fire. The contest at this point continued on for some time. Planting the colors upon the top, the men loaded their pieces under shelter of the brow of the hill, then, rising up, delivered their fire.

After a engaging with the Georgians for several minutes however, Brooke's men began to see the hopelessness of remaining on the ledge that they had worked so hard to gain. "Being notified at this time that a heavy column of the enemy was coming upon my left, I immediately took measures to meet them," Brooke stated in his official report.


I held them at bay for some time, when word was brought to me that my right was being turned, and finding no troops coming to my support, and finding that unless I retired all would be killed or captured, I reluctantly gave the order to retire, and in good order the whole command came off the field slowly, and, firing as they retired, succeeding in bringing off nearly all their wounded.


In their few minutes on the Rose Farm, the little 27th and the rest of Brooke's brigade engaged in one of the bloodiest fire-fights of the battle. On July 5th or 6th, some of the most famous images of the war were recorded in the fields of the Rose Farm, showing the dead of the Confederates units who faced Brooke's men.

One Gettysburg resident, J. Howard Wert, recalled the sight of this particular area of the battlefield:


I was on the Rose Farm...immediately after hostilities ceased.... It was about the most gruesome thing of the many gruesome spectacles of the Gettysburg Field.... No farm on the entire widely extended battlefield probably drank as much blood as did the Rose farm. 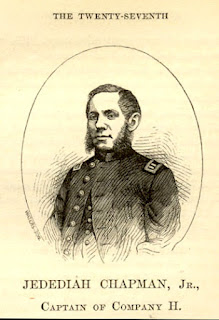 In this fight the 27th lost 10 men killed, 23 wounded, and 4 missing. Essentially, 50% of the command. Among the dead were Lieutenant Colonel Merwin, who fell leading his men across the Wheatfield, and Captain Jedediah Chapman.

Later that month, the small band of the 27th Connecticut remaining mustered out of federal service and returned home. To many of those men, their fight on July 2nd at Gettysburg stood as a testament to their service to the country for 9 months in 1862 and 1863. In the years to come, many of the survivors would return to Gettysburg more than once to ensure that their deeds on this field would be remembered.
Posted by Steve L at 1:59 PM