The Bradley's of the 13th Mississippi: A Story of Brothers at Gettysburg


Some of you may know by now that for the month of April Fold3.com - a subscription service for historical military records - has opened up its collection of Confederate Civil War Records for free.  I have not had much of an opportunity to use Fold3 before, so a few nights back I decided to browse. I wasn't looking for anything in particular, but I hoped that I would come across an interesting story for the blog. After a bit of digging around, I started to unravel the story of the Bradley family of Louisville, Mississippi.


As the afternoon waned into evening on July 2nd, 1863, Major John M. Bradley, age 36, waited with the rest of the 13th Mississippi for the order to advance. For an hour or more, the 13th lay in Pitzer's Woods as shot and shell crashed through the trees from a fierce artillery duel raging between the Confederate batteries in their front and Federal artillery in and around the Peach Orchard. Not far from Maj. Bradley, his older brother, 44-year-old 2nd Lieutenant George W. Bradley rested with the rest of the men of Company A. Finally, sometime around 6 p.m., the orders came and the 13th hopped over a stonewall and formed for the assault. General Barksdale rode in front of the 13th - his old regiment - urged them to do their duty, and shouted the orders to move forward. As the two brothers stepped out of the woods and toward the Emmitsburg Road, perhaps they spared a thought for their younger brother, Joseph L. Bradley, who at the age of 26 was killed at Malvern Hill, almost exactly one year before.

The three Bradley Brothers of the 13th Mississippi were all sons of B.H. and Janthe Bradley. John and George were born in North Carolina, Joseph in South Carolina. By 1850, the Bradley family had settled in Winston County, Mississippi. The 1850 Census listed B.H. Bradley as a farmer. Along with his wife, Bradley's household in 1850 included John, and two daughters, Nancy (18) and Mary (16). The same census listed George W. as a merchant and head of his own household, in which 15-year-old Joseph also resided. A look at the slave schedules for 1850 reveal that B.H. Bradley owned four slaves, while his eldest son George owned two. By the 1860 Census, all three Bradley brothers boarded at a hotel in Louisville, Mississippi, with George and John listed as merchants and Joseph as a clerk. The 1860 Slave Schedule for Winston County indicates that neither B.H. Bradley nor his sons owned any slaves at that time. None of the brothers had married.

In March of 1861, John became captain of the Winston Guards. Both he and Joseph were mustered into state service on March 16, and in May the company was organized for Confederate service at Corinth as Company B, 13th Mississippi. Their service records tell us that John stood 6 feet tall, and Joseph - a lieutenant -  5'10". In April of 1862, the 13th was reorganized and Company B became Company A. That same month, George caught up with his brothers and enlisted into the regiment at Lee's Mills, Virginia. On July 1, 1862, the 13th participated in the Battle of Malvern Hill, and Joseph was killed. Around this time, John received a promotion to Major. In September, he was wounded at Antietam, shot through both legs. John was transported to Winchester, Virginia, and received a 40-day medical furlough. He returned to the regiment that winter, after the Battle of Fredericksburg. George's records indicate that he received a furlough to recover from a wound in December of 1862, presumably suffered at Fredericksburg. Despite their wounds, both Bradley's were with the 13th when the march northward began in June of 1863.

As the 13th Mississippi moved forward on July 2, led by General Barksdale, they raised a terrifying rebel yell. A fence in their way disappeared as the men forced their way through to confront the Federal infantry and artillery awaiting them in the farmyard of Joseph Sherfy. The battle line headed straight for the 12-pounder Napoleons of Lieutenant John K. Bucklyn's Battery E, 1st Rhode Island Light Artillery, which spewed iron at them as they advanced. As the battery limbered up to escape the on-rushing Mississippians, the 13th met a line of red-legged zouaves advancing to meet them across the Emmitsburg Road, the 114th Pennsylvania. After a brief but violent collision the 114th found itself flanked and began to stream back across the road. Behind the 114th awaited the 2nd Fire Zouaves of the Excelsior Brigade, sent in an emergency to lend a hand to the crumbling line. For a detailed look at this action from their point of view, you can visit my post written back in January. It was likely at some point during this initial combat along the Emmitsburg Road that Major Bradley fell with a severe wound. His brother George continued with the regiment as it drove the Federal forces from the Emmitsburg Road and began to push toward the Northeast.

As Daniel Sickles' forward line collapsed, the 13th Mississippi pushed forward, and the line eventually made it to the Plum Run Swale between the Emmitsburg Road and Cemetery Ridge. The men were worn out and disorganized from their successful attack. At this time, a brigade of New Yorkers under the command of Colonel George Lamb Willard approached the swale from the east. The New Yorkers closed on the Mississippians and unleashed a deadly volley. General Barksdale fell mortally wounded. Lieutenant Bradley likely fell wounded during this exchange as well, a bullet wound penetrating his right side. The New Yorkers had halted and turned back the Mississippians grand charge. For a detailed look at this counterattack, you can visit a post I wrote last year.

Major John M. Bradley somehow made his way back to a Confederate field hospital. The John S. Crawford farm along Marsh Creek served as the field hospital for Barksdale's brigade, 3 miles behind its line of battle. It is likely that he was taken there. Crawford reported that his house, barn, and outbuildings were filled with Barksdale's wounded, and that his dining room table served as an amputation table. John remained at the brigade hospital throughout the day on July 3. In the early morning hours of July 4, all wounded well enough to move were loaded into ambulances and other wagons in preparation for the long journey back to Virginia. Throughout the day on July 4, as rain fell in torrents, wagons filled with Lee's wounded soldiers filed into the fields along the Chambersburg Pike. The trains began to move out toward Cashtown Pass at about 4 p.m. According to historian Kent Masterson Brown, the column was 17 miles long. For the next 36 hours John and other wounded soldiers faced a horrific ordeal - traveling non-stop in springless wagons up over South Mountain, and then down the Cumberland Valley towards the Potomac River. Scarcely any received medical attention during this time, and many went without food. All the while, the column was harassed by Union cavalry, and even northern citizens.

The column reached Williamsport, Maryland on July 6, where some medical care could be administered and the slow process of evacuation could proceed across the swollen Potomac River. But for John, the evacuation never came. His condition worsened, and when the Confederate army recrossed the Potomac River for good on July 14, he was left behind with other soldiers unfit to continue on. His service record indicates that he passed away on July 28, 1863. His record also indicates that he received a posthumous promotion to Lieutenant Colonel, dated July 2nd. A search on Find A Grave shows that Bradley was originally buried in Riverside Cemetery in Williamsport. After the war he was moved to Washington Confederate Cemetery in nearby Hagerstown.

George W. Bradley did not make it back to a Confederate field hospital. Like General Barksdale, George was captured as Willard's men took control of the Plum Run Swale. With a bullet wound in his right side, he was carried back to a Union field hospital. His record indicates that on July 4 he was admitted to the 6th Corps field hospital at the John Trostle House east of Rock Creek. Here, he died on July 11. His record however, has an interesting bit of correspondence attached. On October 5, 1863, L.W. Oakley, a surgeon from the 2nd New Jersey, wrote a letter to the Army of the Potomac's Medical Director, Jonathan Letterman: 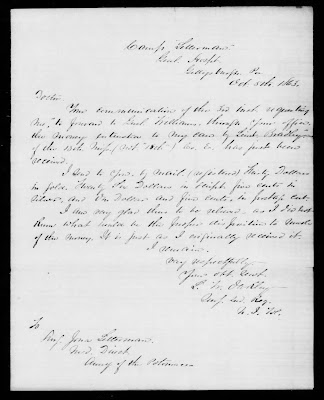 Doctor,
Your communication of the 3rd inst. requesting me to forward to Genl. [Seth] Williams through your office the money intrusted to my care by Lieutenant Bradley of the 13th Mississippi (not "18th") Co. E. [sic] has just been received.

I send to you by mail (registered) Thirty Dollars in gold, Twenty Six Dollars in script. Five cents in silver, and One Dollar and five cents in [illegible].

I am very glad thus to be relieved, as I did not know what would be the proper disposition to make of this money. It is just as I originally received it.

Also attached to George's file is a scan of what appears to be the back side of the above letter, complete with information as to what became of the money: 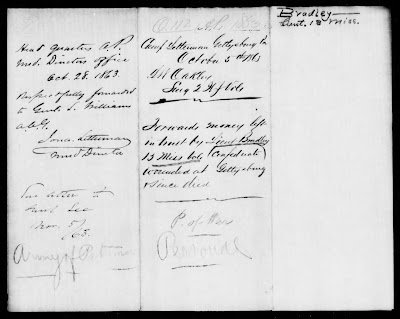 As he lay dying at the 6th Corps hospital in Gettysburg, Lieutenant Bradley hoped that the money he carried would find its way home to his father. The record seems to indicate that it got as far as General Lee's headquarters in November of 1863.  Within the brothers' service files are three records filed by the clerk of the Probate Court in Winston County. On October 8th, 1863 B.H. Bradley appeared with a supporting witness to certify the death of Joseph and John in order to claim any back pay or bounties that the government owed his two sons. Over a month later, on November 26th, 1863, he appeared again to file a similar petition for George. Though George died before John, news of his death in Union hands would have traveled more slowly.

If the money George sent made it back to Winston, Mississippi, it likely was small solace to the father who had lost all three of his sons in battle in one year.
Posted by Steve L at 8:49 PM