A Hike on the Payne's Farm Interpretive Trail 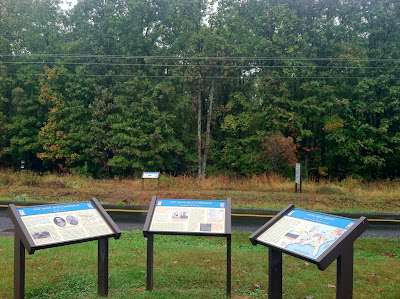 The misting rains continued today, dampening everything, but not quite enough to deter outdoor activities. This morning I took a drive over to Locust Grove, Virginia to check out the Payne's Farm Battlefield. This battle was the largest engagement during the Mine Run Campaign of November, 1863. It pitted Edward "Allegheny" Johnson's Confederate division against the Third Corps of the Army of the Potomac. Over the years the battle, and the Mine Run Campaign as a whole, has received little attention. And yet, due to its rural, agricultural surroundings, the battlefield has survived untouched by modern intrusions. The Civil War Trust and the Piedmont Environmental Council purchased the land in 2003, and in 2011 the Trust opened a 1.5 mile interpretive trail to allow visitors to explore the site.  The trail begins at the Zoar Baptist Church on State Route 611, 2.4 miles north of Route 20. The church allows visitors wishing to explore the trail to park in its parking lot (special arrangements must be made on Sundays). 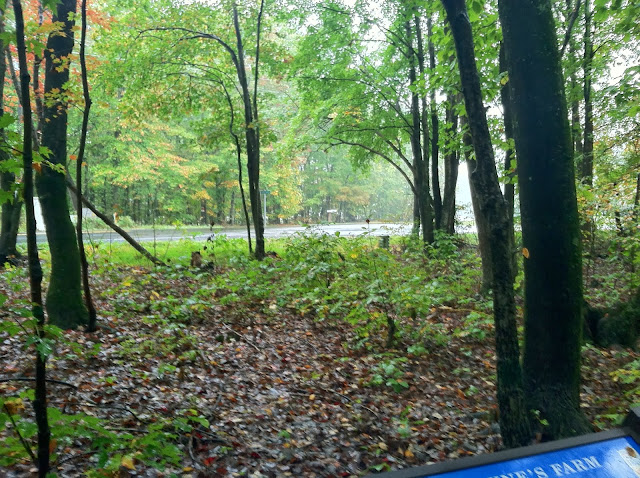 On the afternoon of November 27th, Union skirmishers approaching the intersection along Jacob's Ford Road (from the camera's right) opened fire on the tail of Edward Johnson's Confederate division, which was passing along the road pictured from right to left. Brigadier General George H. Steuart commanded the final brigade in Johnson's column. Steuart halted his command around the intersection, formed it into a line of battle in the road, and then advanced into the woods to engage the federals. Johnson quickly surveyed the situation and had the rest of his division countermarch to the developing engagement. He did not know that he faced an entire army corps.

From this stop, the trail turns northward and moves through the woods while paralleling the Jacob's Ford Road. As I made my way along the trail, I found only one other soul making use of it on this rainy morning.


The initial engagement between Steuart's brigade and Union General Henry Prince's second division of the Third Corps eventually bogged down into a stalemate in the thick woods. Meanwhile, reinforcements made their way to the field.  On the Union side, General Joseph Carr's third division arrived on the scene and moved into position on Prince's left flank, just as Johnson was attempting to turn it. The trail here turns sharply eastward to follow the advance of Carr's three brigades. For most of Carr's men, this would be their first true taste of battle. 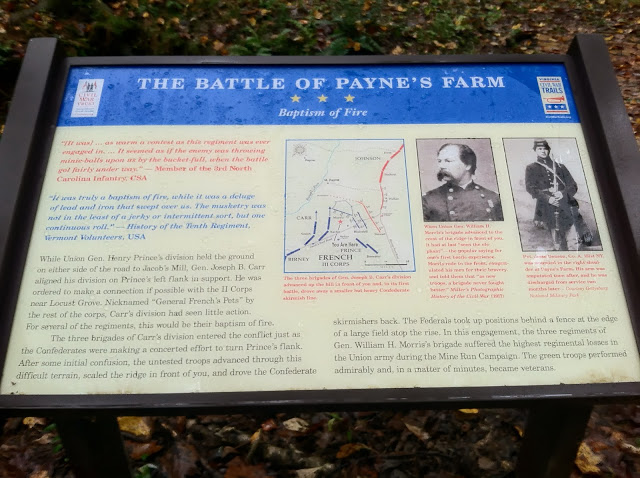 Carr's men advanced through the difficult terrain down into a shallow depression, across a small stream, and then up a steep ridge, pushing back a thick line of Confederate skirmishers. After making it to the top of the rise they took a position along a worm fence at the edge of the woods, overlooking open fields. From this position, they beat back several Confederate assaults.


From this point, the trail turns southeast and makes its way to farm lane of Madison Payne, who owned the farm that gave this battle its name. As the battle progressed, Confederates established their main line of battle in Mr. Payne's lane, and launched several uncoordinated and unsuccessful assaults across his fields toward Carr's men positioned in the woods beyond.

After dark, the Confederates fell back to Raccoon Ford Road, and eventually the main Confederate position being set up behind Mine Run. Johnson's assault against the Third Corps was technically not successful, but it delayed a significant portion of the Army of the Potomac for an entire afternoon, and gave General Lee much needed time to set up an impressive defensive position behind Mine Run. The strength of Lee's position doomed Meade's campaign to failure.

The 1.5 mile Payne's Farm loop takes about an hour to an hour and a half to complete if you plan on reading all of the interpretive signs (which are well done). Later this week I'll take a more detailed look at this battle as I continue my series on French's Pets. If you can't make it yourself to explore the Payne's Farm battlefield, enjoy this nicely done video tour from the Civil War Trust's Garry Adelman:


4 Minutes at Payne's Farm from Civil War Trust on Vimeo.
Posted by Steve L at 3:21 PM