Just about a year ago last week I found myself in Gettysburg, Pennsylvania with thousands of others commemorating the 150th anniversary of the largest battle of the Civil War. I didn't make it for the battle anniversary this year, but my thoughts turned to Gettysburg, nonetheless. Last Monday, I decided to commemorate the campaign in a different manner, by taking my first trip to the site of its opening battle: Brandy Station.

Armed with driving tours put together by Fredericksburg & Spotsylvania National Military Park, I began my excursion with a visit to Kelly's Ford on the Rappahannock. Modern route 620 crosses the river about 300 yards upstream from the ford. Just before the bridge is a parking lot and a boat launch operated by the Virginia Department of Game and Inland Fisheries.


The ford can be reached by following a well worn footpath along the river. A sign delineates its actual location.


Kelly's Ford served as a vital crossing during the war. In March of 1863 a small cavalry action took place here when 2,100 troopers and six cannon under the command of Brigadier General William Averell  forced their way across the river and engaged Confederate cavalry led by Brigadier General Fitzhugh Lee. Interpretive signs placed by the Civil War Trust near the ford explain the significance of this small action. Kelly's Ford also served as the crossing site of David McMurtrie Gregg's column of cavalry on the morning of June 9th, 1863, on its way to Brandy Station.

After working my way down to the actual site of the ford, I retraced my steps, got in my vehicle, and followed the NPS's driving tour for the Battle of Kelly's Ford. A portion of this battlefield is preserved as part of the Phelps Wildlife Management Area, including the location of the mortal wounding of the Confederacy's young and talented horse artillerist, Major John Pelham. After completing my brief tour of the Kelly's Ford battlefield, I moved on just a few miles to the Brandy Station Battlefield Park, site of the largest cavalry battle of the war.

On the morning of June 9th, 1863, Major General Alfred Pleasonton had orders to take a force of 8,000 cavalry and 3,000 infantry, cross the upper Rappahannock River, and "disperse and destroy" the enemy's cavalry. Pleasonton's forces crossed in two columns - John Buford's right wing crossed at Beverly Ford, while David McMurtrie Gregg took his troopers across at Kelly's Ford, six miles downstream. Believing Stuart's forces to be in the vicinity of Culpeper, the federals intended to link up at Brandy Station. Instead, they ran into Confederate resistance immediately.  When Gregg's column got off to a late start, Buford found himself fighting on his own on the south side of the Rappahannock shortly after dawn.

At his headquarters on Fleetwood Hill, a tall ridge near Brandy Station that dominated the surrounding landscape, Stuart was surprised by Buford's advance. Reacting quickly, he road to the northeast and established a strong defensive position along a ridge near St. James Church. After several hours of intense fighting on this front, things for Stuart looked under control until reports arrived indicating that Gregg's command was advancing up from Brandy Station in the Confederate rear. Rebel troopers rushed back to defend Fleetwood Hill, arriving in the nick of time. The hill became a witness to wild scenes of charges and counter charges, as the two foes struggled for its possession for the next five hours.

Eventually, Pleasonton realized that he did not have a force sufficient to destroy Stuart's command and withdrew his men back across the Rappahannock. In later years the federal cavalry chief would claim that he had uncovered the important intelligence that Lee's army was invading the north, but the reality is that Pleasonton failed to discover the presence of Confederate infantry nearby. And yet, despite failing in their principle objective of dispersing and destroying Stuart, and failing to discover evidence of Lee's movements, the federal cavalry earned a significant mental victory at Brandy Station. Out-fought throughout the war up until this point by their Confederate counterparts, on this battlefield they had stood toe-to-toe with their enemy and had proven that they could match them.

Today, Brandy Station stands as a preservation success story, as this recent article from the Civil War Trust reveals. The battleground stood nearly untouched, yet unprotected into the 1980s. From the late 1980s through the early 2000s, a succession of developers threatened the battlefield. Local and national preservationists rallied to resist each attempt, including plans for an office park and plans for a Formula One racetrack. They fought off each crisis, and eventually began to buy up and protect the land, little by little. In 2003, the Civil War Trust and Brandy Station Foundation were able to open the Brandy Station Battlefield Park. Perhaps the culminating moment came last year - when the Civil War Trust was able to purchase 56 acres atop Fleetwood Hill, the critical ground at the center of the battle. Today, the central core of the battlefield (1,860 acres) has been preserved.

I began my tour of Brandy Station by pulling my car off the road on Route 685 (the old Carolina Road) at a location that provides a nice vantage point from which to view Fleetwood Hill. Here two interpretive signs related "The Race for Fleetwood Hill" and "The Struggle for Fleetwood Hill." The high ground served as Stuart's headquarters during the battle, and as the highest eminence around, it was the key terrain. With its recent acquisition, I hope that the Civil War Trust will soon open up a hiking trail here with interpretive signage, as they have done so well in other locations at Brandy Station, and on other battlefields. For the time being, there is not much more to explore in this location, at least for someone unfamiliar with the battlefield, as I was.

Leaving Fleetwood Hill, I traveled northeast and turned onto the Beverly Ford Road, modern route 676. After passing by the Culpeper Regional Airport, I turned left into the Battlefield Park and left my car to enjoy the Buford's Knoll Interpretive Trail. This two mile out-and-back hike contains four interpretive markers.

The first markers describe Buford's initial advance along the Beverly Ford Road, the Confederate response, and the death of Colonel Benjamin "Grimes" Davis as he led the Union advance that morning. 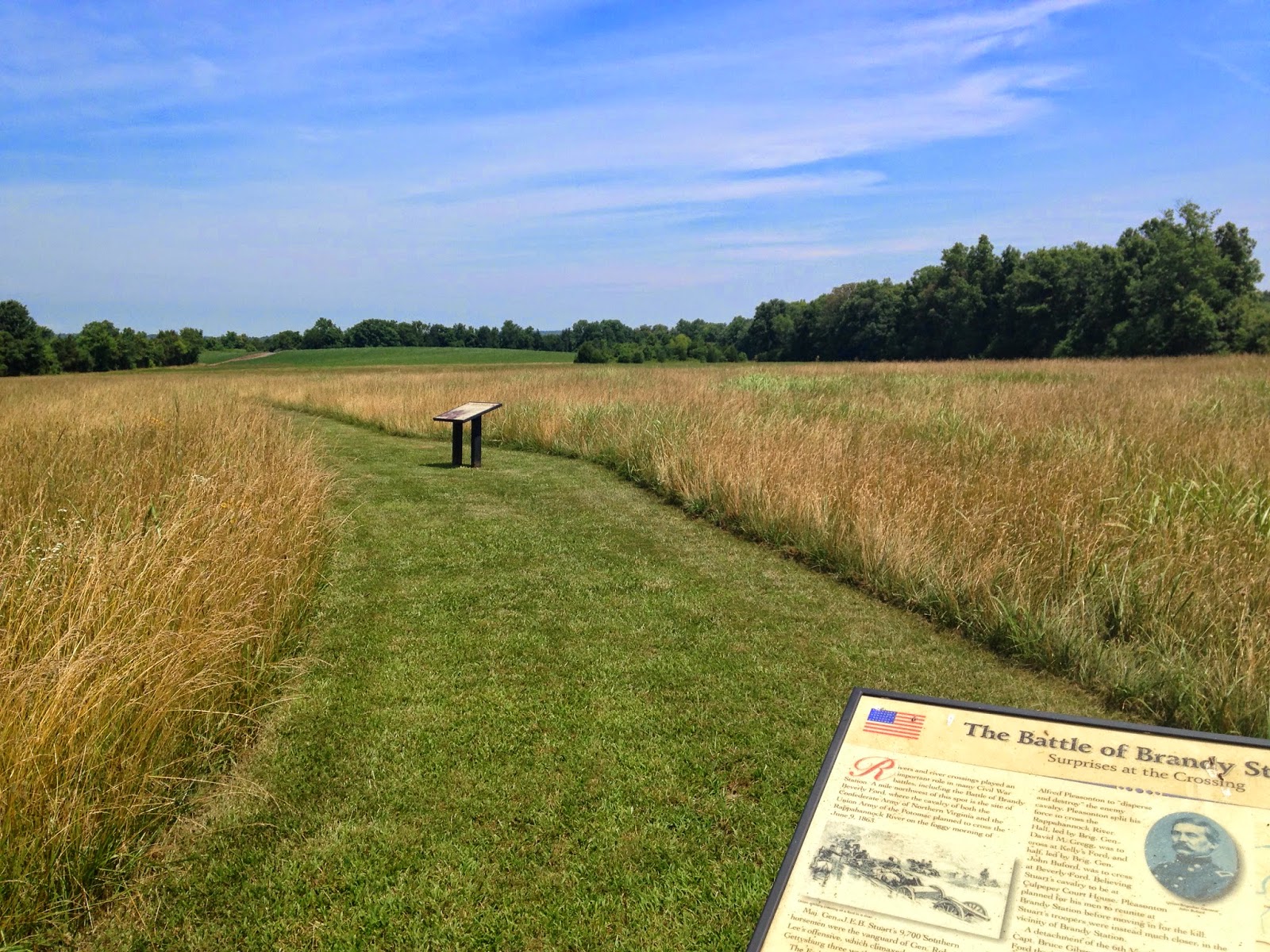 After reading these signs I followed a mowed path that connected in with a gravel road. Hiking north the trail crosses Ruffan's Run and ascends a knoll used as a command post by General Buford. Here I found the trail's final two stops. These signs described Buford's attempt to swing his forces north and west around Stuart's left flank, and Rooney Lee's skillful use of terrain to block Buford.


After retracing my steps I hopped back in the car, drove a short distance on the Beverly Ford Road, turned right onto the St. James Church road, and arrived at the St. James Church Walking Trail. This five stop, one mile hike interprets the fighting around the church, where Stuart set up his initial defenses against Buford on the morning of June 9th. A few stops on the trail also discuss the Army of the Potomac's occupation of Brandy Station in the Winter of 1863/1864, and its encampments there.


Part of this trail covers the ground crossed by the 6th Pennsylvania Cavalry on the morning of June 9th, as they charged into the very teeth of sixteen pieces of rebel artillery located along a plateau near St. James Church. The 6th Pennsylvania made it to the very muzzles of the guns, but were driven back with heavy losses. The regiment suffered more casualties than any other at the battle.

In all, I spent about half a day exploring Brandy Station and Kelly's Ford, and could have spent more time had it not been for the brutal heat and humidity. The same open fields that allowed for easy maneuvering of mounted troops left little shade for me. The Brandy Station battlefield is in an excellent state of preservation. With its rolling farmland and sweeping vistas, the ground seems as if it were an amphitheater especially designed for the largest cavalry battle of the Civil War. If you find yourself in Central Virginia and looking for a lesser-known battlefield to visit, Kelly's Ford and Brandy Station are both worth exploring.
Posted by Steve L at 8:06 PM