Sketching out a Unionist Spy Operation in Orange, Virginia and stumbling across Charles A. Beard

The mystery begins with a photograph taken at Brandy Station, Virginia in March of 1864. The image depicts scouts and guides of the Army of the Potomac just a few months before the start of the Overland Campaign. 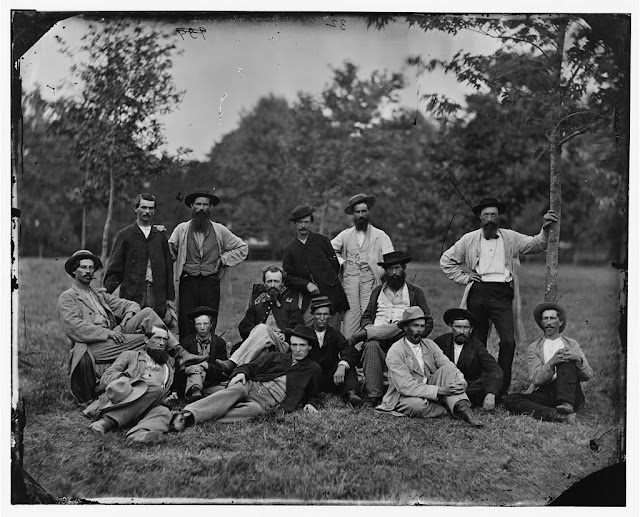 According to the Library of Congress summary, the second man standing from the left may be James Cammack. I say "may" because a question mark placed after his name indicates a lack of certainty. How his name became attached to this photograph in the first place, I am unaware.

Who was this man dressed in civilian clothing, and what was his role with the Army of the Potomac in March of 1864? A variety of sources connect some, but not all, of the dots, adding to our knowledge of how Unionist Virginians provided invaluable assistance to the Army of the Potomac's Bureau of Military Information.

The information contained in dispatch of 29th ultimo was obtained by the scouts from an agent named Cammack, an old man who lives near Orange Court-house. Scouts in this morning, who derive their information from the same source, report the following: No troops have passed to or from the Valley since Fitzhugh Lee's cavalry went up. Force of infantry there is Ewell's old corps, Breckenridge's division, and Anderson's brigade of Field's division. Have been steadily falling back of late, but no signs of their leaving the valley.

This information is to the 3d instant, and Mr. Babcock, who has charge of scouts, thinks it reliable.

Ten days letter, another message sent from the head of the Bureau of Military Information, George Sharpe, to Army of the Potomac Chief of Staff Andrew A. Humphreys also mentioned Cammack:


I have a report from Captain McEntee, dated day before yesterday, at Washington. Scouts had returned that morning from Cammacks and Silvers. The news they bring amounts to the absence of all movements through Orange Court-House toward or from the Valley. Cammack reports that a neighbor of his lately received letters from friends in the Ninth and Thirtieth Virginia Regiments...."

Two scholars of the intelligence operations of the United States army during the Civil War, Edwin Fishel and William B. Feis, obliquely refer to the agent named Cammack in their writings, but spend more time exploring the role of another spy in the area, Isaac Silver. In Fishel's landmark study, The Secret War for the Union, he writes:


Silver again put his Orange county business connections to use as cover for visits to that problem area. He paid special attention to railroad depots, where he questioned railroad employees and travelers, seeking information of movements on the Orange and Alexandria and the Virginia Central, and any other military news they might have. James W. Cammack, who evidently had connections similar to Sliver's (and shared with Silver the sobriquet 'the old man') was similarly employed.

In Feis's work, Grant's Secret Service, he writes something similar:


Sharpe sent Babcock to Washington in early August to establish an organization to monitor Early's main rail links with Richmond. This operation depended upon three Virginia Unionists who lived in the vicinity of the depots of the Orange and Alexandria; the Richmond, Fredericksburg, and Potomac; and the Virginia Central Railroads. Isaac Silver (alias 'the old man'), James W. Cammack, and Ebenezer McGee, all of whom lived west of Fredericksburg, would visit the depots regularly, question passengers and railroad employees about the composition and direction of recent traffic, and watch specifically for troop trains heading for the valley.

Yet the identification of James W. Cammack as the individual referenced in the September, 1864 dispatches flowing to and from Grant's headquarters at City Point raises some questions. One dispatch clearly labels "Cammack" as an old man. Census records reveal that there was a James W. Cammack who lived in Orange County, Virginia. However, he was born in 1833, and in 1864 would have been about 31 years of age. This potentially matches the Library of Congress image we have of Cammack at Brandy Station, but neither supports the description of an old man.

A variety of census, marriage, and death records  start to unravel the mystery of the Army of the Potomac's agent, including census records for 1850, 1870,and 1880. James W. Cammack's parents were William E. and Rebecca Cammack. They operated a farm of about 150 acres in Orange County, Virginia at the beginning of the Civil War. William E. was 53 years old in 1861, and his wife 66. The couple had at least three children: James W. (age 28 in 1861), George W. (24), and Catherine (19). George W. enlisted in the Confederate army in 1861, serving with the 46th Virginia, but his brother apparently did not.

There is compelling evidence to suggest that the "old man" related by Union reports was actually William E. Cammack, and that his son served for a period as a scout for the Army of the Potomac, traveling to and from his father's home. 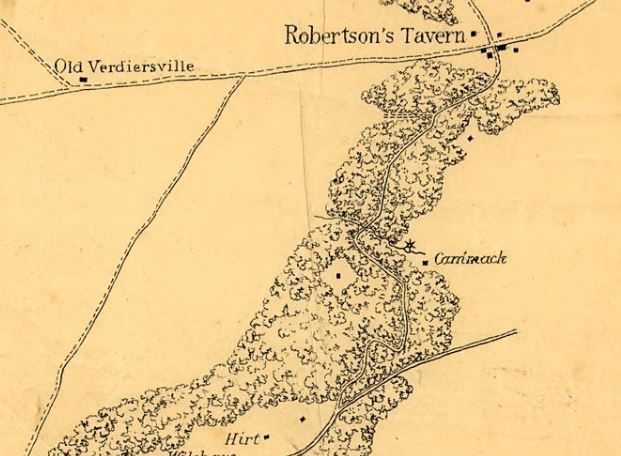 An 1863 Army of the Potomac map in the Library of Congress highlights a residence named "Cammack" just south of Robertson's Tavern and Old Verdiersville, several miles to the east of Orange Court House.

Then there's an intriguing account left us by Judson Knight, a man who served as a scout (and later chief of scouts) in the Army of the Potomac. Writing in The National Tribune on July 21, 1892, Knight weaves the following story of creating a new source of information within Confederate territory:


During that [Mine Run] campaign a party of scouts from Army Headquarters found themselves in the vicinity of "Old Vidersville," about 12 miles south of Culpeper, Va. in the neighborhood of the farmhouse that looked as though food for man and beast might be procured. Upon the party riding up to the house they were met by an old Virginia farmer who anxiously asked if they were "Yankees." He was told that they were, to which he replied, "I am mighty glad to see you-all."

"Oh! Give us a rest; we have heard that kind of talk before," was the reply from some of the scouts. The old farmer looked anxiously and rapidly from one to another, and a shade of fear swept over his face as he observed the motley dress of several of the party until his eyes rested upon one who wore a full Federal uniform. He scrutinized him carefully, while the boys were still chaffing him, and addressing him personally, said: "Are you Yankees?"

"Yes, we are!" And the reply was so emphatic and made in such a tone as though the speaker was proud of the fact and of the chance of telling one whom he supposed to be an enemy of the government, that his face instantly cleared and all could see that his assertion of "I am mighty glad to see you all," was a fact.

"Come, gentlemen, light," was his next salutation; and they "lit."
"Can you furnish us a dinner and a feed for our horses?"
"Yes, and glad to do it, too."

While discussing the news the old farmer said: "I am glad you-all came out here today, for I have a son that I want you-all to take with you when you leave here."

He was told that it would not be done, as there was no spare horse for his son to ride.

"Never mind about the horse. I have got as good a horse as any of you-all, and he can have him, if you will only take him along with you all."

All hands saw by this time the old man was a Unionist, and in dead earnest. He told the party his son had been in a neighboring State, and had been able to keep out of the army until the previous June, when he was conscripted and allowed to go home to join a Virginia regiment. He had been home about six months, hid in one of the chambers, and had not been out of doors in daylight in all that time. Stepping to the stairway he called him down. His son was about 32 years of age, and about five feet 10 inches in height, and as white as ghosts are supposed to be, from his enforced seclusion during all those weeks. He was taken along, and when Gen. Meade fell back across the Rapidan he went with us.

Some time during the month of December, 1863, it was concluded at Headquarters that if we could find a good crossing just above Jacob's or Germanna Fords, we would start a line between Headquarters of our army and Headquarters of the Army of Northern Virginia by sending relays of men to the house of the old Unionist, whose name I am not going  to divulge; neither shall I tell the name of his son, but in future will refer to him as "Bob."

The "old man" - William E. Cammack - continued to live in Orange, Virginia after the war. In the 1870s he applied for and apparently received reimbursement for war damages from the Southern Claims Commission. Reimbursement required proof of Union sympathies and loyalty.

His two sons went west. Both James and George moved to Indianapolis after the war. George returned to Virginia by 1870 and was later buried at New Hope Baptist Church in Orange County, Virginia, along the old Plank Road.

James W. Cammack did not return. At an unknown date during or perhaps before the war, James had married Laura Ann Beard of Guilford County, North Carolina. If James and his father are the individuals referenced in Knight's account, it is likely that North Carolina was the "neighboring state" that Cammack spent time in prior to returning to Virginia upon his conscription.

Laura Beard's family were staunch Quaker Unionists during the war, and removed to Indiana at its conclusion, apparently leading or following James and Laura Cammack. James and Laura eventually settled in Knightstown, Indiana with the rest of the Beard family. And it was in Knightstown in 1874 that their famous nephew, noted American historian Charles A. Beard, was born.

Fishel, Edwin C. The Secret War for the Union: The Untold Story of Military Intelligence in the Civil War. New York: Mariner Books, 1998.

United States War Department. The War of the Rebellion: a Compilation of the Official Records of the Union and Confederate Armies. Washington, D.C.: Government Printing Office, 1880-1901.

Tsouras, Peter G. Scouting for Grant and Meade: The Reminiscences of Judson Knight, Chief of Scouts, Army of the Potomac. New York: Skyhorse Publishing, 2014.
Posted by Steve L at 7:31 PM