Remembering Where We Are - Part 1

At my day job I work at a history museum, and I work with public audiences all the time. It goes without saying - I've had to answer all sorts of interesting questions. If you work at a museum or historic site, or really if you work with the public in any capacity at any job, you will field some of these questions. Talking with some guides and park rangers at Gettysburg over the years, I've learned some of the best questions that they've had to answer. Some of these questions seem so silly that I have often wondered if they are legit or apocryphal.

One of my favorite questions supposedly asked of park rangers and battlefield guides goes something like this: why did they fight all of the battles in the Civil War in National Parks?

At first glance, the question seems absurd, and it is. But I like this question because it gets at something that many of us - myself included - ignore or forget. We know that the battles came before the National Parks, but we can easily lose sight of the significance of the ground the contending armies fought over. Today, we look at the landscape and think: "battlefield." We rarely think "farm," or "home."

Over the past couple of days I've been thinking about this phenomenon - we can see the houses today, follow the traces of their farm lanes, and see where they built their fences. Yet it remains all too easy to gloss over the civilian toll of the battle of Gettysburg. For my next series of posts I thought I would look into one of the farmsteads on the battlefield: the John Slyder Farm, and find out the battle's impact on Slyder and his family.

Born in Maryland around 1813, John Slyder married Catherine Study in Carroll County on September 25, 1838. The young couple soon moved to Gettysburg, where they began to raise a family. In the 1840s the Slyders resided on South Washington Street in the borough, and John went into business with a local potter named Edward Menchey. An 1847 advertisement in the Adams Sentinel also listed Slyder's house as a pick-up and drop-off location for a woolen manufacturing business. Citizens looking to have woolen goods manufactured at a factory located 3 miles outside of Hanover could drop off their own wool at Slyder's residence and pick up the finished product at a later date.

In 1849, Slyder purchased a 74-acre tract of land 3 miles south of Gettysburg from Christian Shully, and began to make a working farm out of it. By 1852, Slyder had on the premises a one-story parlor style stone house, along with several outbuildings, including a double-log barn, a summer kitchen and woodshed, a hog pen, privy, and chicken house, a smokehouse, and a blacksmith shop. Around this time, John and Catherine moved out of the borough and down to the farm permanently.

We know from his later advertisement to sell the property that John Slyder, or perhaps a previous owner, nicknamed his small tract of land Granite Farm. Likely the name derived from the building materials of the farmhouse, although anyone who has spent time walking the ground in that area also knows that it served as an apt description of the rocky terrain John had to farm. Throughout the 1850s the Slyders farmed the land here at the foot of Round Top and along the banks of sluggish Plum Run. They maintained a thriving orchard, some 18 acres of meadow, and at least 30 acres of timber. With his blacksmith shop, John also manufactured iron tools and implements for neighboring farmers. The Gettysburg newspapers from the 1850s show that he was an involved and respected member of the community. John's name appeared several times as a witness to the good character and morals of other locals applying for permits to run boarding houses or taverns. In 1852 his neighbors in Cumberland Township elected him to the post of inspector.

In July of 1863 John and Catherine lived on Granite Farm with their three youngest children: John (19), Hannah (16), and Isiah (9). Their two eldest children, William (c. 25) and Matilda, (23) had already moved out. Three years earlier, the 1860 U.S. Census listed the value of John's real estate at $2,000, and the value of his personal possessions at around $800. Though it lay only a few days of hard marching from Virginia, Granite Farm had avoided the hard hand of war through the conflict's first two years. Indeed, it seems that the farmers of Cumberland Township had more to fear from local intrusions. In 1862 the following notice appeared in a Gettysburg newspaper: 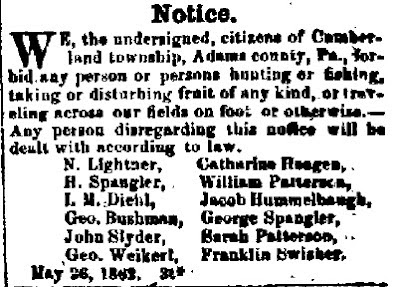 Little could John Slyder and his neighbors dream of the extent of trespassing that would occur over their lands during the first three days of July in 1863.