The Case of Coffroth vs. Koontz

By now the reviews have all come in - and there were a lot of them. Indeed, some seem exasperated by the amount of coverage Lincoln received from historians and bloggers. I've had my say as well on the movie - I liked it. But after weighing in a bit, I've personally found myself more interested in digging into primary sources to learn about the real story than debating what Spielberg got right or wrong. And it seems I've gotten myself a bit side-tracked exploring one of the more interesting side-stories.

A few days back I posted a bit on what I had found about Alexander Hamilton Coffroth's decision to switch his vote - he opposed it in June of 1864 but voted for it in January of 1865. The movie has its take on the flip-flop: Coffroth's reelection that fall was under considerable dispute, and voting with the administration would presumably pull some strings to ensure that he could remain at his post. In the film, Coffroth agrees to vote for the bill, and switch to the Republican Party in the next session.

In real life, such a party switch did not materialize - and Coffroth was seated in early 1866 only to lose his seat to his Republican challenger in July.  I decided to dig a bit deeper into this election - and discovered that it has some Gettysburg connections. In the next series of posts I will use primary sources to take a look at the controversy surrounding the election, and the resulting decisions that led to Coffroth taking his seat in January, 1866, and subsequently losing it in July.
--------

Alexander Hamilton Coffroth first earned election to Congress in the wave election of 1862 that swept many Republicans out of power. Coffroth ran in the 16th district, and narrowly unseated Edward McPherson, a Gettysburg native who had studied law under Thaddeus Stevens. Most remember McPherson today for the farm that he owned on the first day's battlefield (though he rented it out at the time of the battle). McPherson does make a cameo appearance in Lincoln as well, played by Christopher Evan Welch. In 1865 McPherson was serving as the clerk of the House Representatives.

The sixteenth district Coffroth served was composed of Adams, Bedford, Franklin, Fulton, and Somerset counties. In the election of 1864, Coffroth ran against Republican William H. Koontz. The result - as the film tells us - came under dispute, and received a great deal of coverage in Gettysburg newspapers, both Republican and Democratic. In reading about this dispute, those of you who closely follow modern politics will recognize that not much has changed in regard to election controversies in our country.

The central question of the controversy revolved around the certification of the soldiers' vote. In this election - the Republican Party counted on strongly favorable margins from soldiers at the front, and went to great lengths to ensure those votes counted. On the other hand, Democrats sought to disqualify the soldiers' vote on technical grounds where they could. 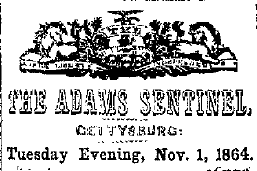 On November 1, 1864, The Republican Adams Sentinel reported on the controversy:


Bold Attempt to deprive Gen. Koontz of his Election
The Return Judges met on Friday to receive and count the Returns of Soldiers' votes. These returns gave Koontz 292--Coffroth 115. Majority for Koontz, 177. During the day, it was whispered that the Democratic Judges had held a caucus at the Globe Hotel, with three of our young Democratic lawyers, and determined to exclude a portion of the Soldier vote. But nobody seemed disposed to credit the rumor. On Friday evening the town was much excited by the announcement that the Democratic Judges had actually rejected eight Returns, which had given Koontz 108 majority. As the telegraph from Harrisburg had announced Koontz's majority in the district to be only 72, this exclusion of the soldier vote, if recognized by the Governor, would of course give the Commission to Coffroth--a defeated candidate. We learn that the Union Judges protested against the outrage--and drew up a calm, dignified Protest, which was forwarded to the Secretary of the Commonwealth, and a copy of which will be found in to day's Sentinel.

We have been curious to know the reason of this singular and bold attempt to disenfranchise over 200 of our gallant heroes, and have been surprised to learn that the objections were all of a most frivolous character--all matters of informality.

On November 7, 1864, Gettysburg's Democratic organ, The Compiler, responded. It began by outlining all of the guidelines required by law for the counting of the soldiers' vote. Then, one by one, it took up the rejected returns: 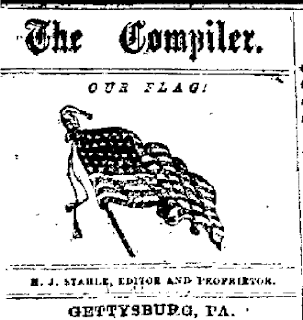 The Prothonotary did deliver to the Return Judges copies of 31 returns, of these twenty-four were received and counted. Seven were not received, they appearing, as the Prothonotary cetified, to be in violation of the Act of Assembly, and his copies of them showing for the information of the Board and the public also, wherein they were defective and illegal. These he need not have certified at all, but he did so doubtless to let all have an opportunity of seeing and judging their illegality.

The first not received was the return attempted to be made of election held by Co. K, 184th Regt., which included a voter of Franklin county. This of necessity vitiated the whole return. It could not be told how that Franklin county elector voted. The officers of that election had made an illegal return. They had disregarded the law and no man can show how the Board could have counted the votes of such a return. The Return Judges are sworn and they must act in accordance with law.

The next was of Co. C, 202d Regt. In this case but one Judge was elected, and but that same one Judge acted and made the return. This was not an election held and a return by the three Judges, as directed positively by the law. It was a return unknown to the law and could not be received.

Returns for Mower U.S. Gen'l Hospital, Cuyler U.S.A. Hospital and McClellan U.S.A. Gen'l Hospital, the two former giving each one vote, the last three votes, were not received, because they did not contain the oathes and certificates of oaths of the Judges and Clerks. There was nothing to show that the officers holding these elections were qualified according to law.

A return of election held at one poll, before one set of election officers, by Companies B and G, of 138th Regt., was sent to the Prothonotary. This was in glaring opposition to the law, which, as has been seen, directs emphatically that "a poll shall be opened in each company." No excuse could be given for the admission of such a return and it could not be received.

Duplicate returns for Co. I, 210th Regt., containing names of voters of Adams, Franklin, Fulton, Bradford, Columbia and Perry counties. There was no certificate of the oath of two of the Judges and the Clerks. If the Board of Return Judges is a machine to count votes, not to examine what is before them, but to "go it blind," as some of the opposition wanted them to do, then of course these double returns of this Co. must be counted. They were not according to law and the Board did not receive them.

The Return for Co. B, 21st Regt. Cavalry was so defective and illegal that the Prothonotary could not and did not certify a copy of it. It contained names of voters of Franklin, Adams and York counties, and a return of votes for the different officers voted for in the three counties. An election was attempted to be held by Judges and Clerks who were qualified by a person not an election officer, in violation of the law. The effect was the same as if they had not been qualified at all. Therefore those Judges and Clerks had no right to hold an election or make a return of it. It also appears that there were in this return more votes cast for Coffroth and Koontz than there were Adams County voters. The Judges could not, for the reason given, count those votes. There was no legal paper before them to enable them to do it.

Not a solitary argument worthy of the name was or could be presented in support of the illegal returns. The election officers were amply provided with blanks, by the Secretary of the Commonwealth, for conducting the elections according to law. $15,000 was appropriated by the Legislatures for the purpose and to carry the law into effect, but in many cases its provisions have been disregarded.

Mr. Sweeney, the Return Judge of Gettysburg, offered a motion to throw out the returns of Franklin and Cumberland townships, for some alleged "inconsistencies between the certificates and tally lists, but his motion was properly declared by the Board out of time and out of order. The day for the district returns had passed, and those returns are governed by the general law. Mr. Sweeney's motion was sustained by the seven Republican Judges, and the right the Board had to examine the returns and not receive such as were not returns under the law, was by the course of the seven Judges on this motion, not only conceded but unanimously ratified.

Notwithstanding, these seven, "a rebellious minority," only one-third of the whole number, refused to sign the certificates, refused even to sign a certificate showing the action of the Board in not receiving the eight returns, but left the Court House in the wake of a few Abolition leaders to do their bidding.

It was objected by one of the seven that the Act provided that no mere informality shall invalidate the elections under it. Certainly not, and not a single return was not counted on the ground of "mere informality." Informality is want of form. Illegality is another thing.... The Judges are to count legal returns and such only, intolerant McPherson and his vile slanders upon good men and the wrath of a few other intolerant bigots, to the contrary notwithstanding.

The action of the Board is right in the opinion of eminent legal counsel of different parts of the State, and of law abiding people. Illegal returns were not even laid before the Return Judges of Bedford co. The Prothonotary could not certify any but such as were in accordance with law. There is no "military necessity" compelling the Return Judges to suspend the operation of a law so recent as the 25th of August, 1864. Although it is to be sincerely regretted that any of the returns of the soldiers' vote, or their elections, were not legal, adherence to the law was the only right and safe course for the Judges.

As these sources tell us, The Return Judges divided over the decision to reject soldiers' votes. As a result, conflicting certifications were sent to Governor Curtin. I'll continue this story in a later post.
Posted by Steve L at 8:33 PM