The morning dawned with a faint hope that the nor'easter had passed. The pelting rains of the previous day had already made many of the roads a muddy quagmire. Tthe dark gray clouds and chill winds looked ominous, and yet the mounted aides dashing about seemed to indicate that the march would come off as planned. Regiments had begun to organize themselves when, sometime between 10 and 11 a.m., the winds picked up and the rain began to fall. General David McMurtrie Gregg had seen enough, and issued the necessary orders. The parade of veterans was off.

The weather had not fully cooperated with the Pennsylvanians on their day of days, and even before the parade's cancellation the railroad depots faced a crush of veterans and spectators. As each train sped away packed to full capacity, those remaining in town sought whatever shelter they could to get in out of the downpour. The long anticipated Grand Parade being off, the Gettysburg Compiler noted, "the one desire on all sides was to get away, and the formal exercises...attracted a comparatively small audience." It was a quiet end to what had been several action packed days in Gettysburg, Pennsylvania.

The crowds had begun to swell earlier in the week. A dispatch sent to the Bradford Era on Tuesday, September 10th observed: "All day long veterans from the eastern and central portions of the State have been marching from the depots to camps." It estimated that the crowd might reach 50,000 by Thursday. Reporting after the festivities had concluded, the Star and Sentinel gave an estimate of 20-40,000, while The Compiler settled on 30,000.

They had all come to celebrate Pennsylvania Day. Among the throng were roughly 10,000 veterans, brought to Gettysburg via free transportation provided by the state of Pennsylvania. The rest consisted of family members, dignitaries, and general spectators who wanted in on the big event. "There was scarcely a house in town," The Compiler reported, "that did not in some way contribute to the entertainment of the visitors, and many of them got quarters in farm houses within a radius of several miles around the place."

Wednesday, September 11 - Veterans' Day - featured the dedication of 46 regimental monuments all over the field. From morning to evening, the town buzzed with the activity of regimental associations moving through town out to the various dedications, even when the driving rainstorm set in that afternoon. That evening was devoted to eating, drinking, music, and story telling. The Compiler claimed that the supply of provisions at the eateries in town held out. "The supply of wet goods was also equal to the occasion," it added, "the malt product being in general favor." Despite the merry-making, law enforcement managed to maintain good order, and the Star & Sentinel reported that no arrests were made, "except for drunkenness."

Thursday, despite the rush to get out of town, the formal ceremony slated for 1:30 went off, though the venue moved from the National Cemetery to the rink, a long, low building in town frequently used for balls and other festivities. The venue could hold nearly 3,000, but many estimated the crowd at less than half of that. Even the presiding officer, Colonel George Meade Jr., cancelled due to illness. The program featured Governor James A Beaver, an address on the first day of the battle delivered by Brevet Capt. Joseph Rosengarten (aide-de-camp of Maj. Gen. Reynolds), and an address on the final two days of the battle given by Brevet Brig. Gen. Henry Bingham (Major on Maj. Gen. Hancock's staff). The Pennsylvania monuments were officially transferred to the Battlefield Memorial Association, and Edward McPherson accepted them on the Association's behalf.

To many who participated, these couple of days in Gettysburg seemed like a last great gathering on the battlefield. As the Star & Sentinel explained it:


It was a common remark among the veterans that never again would there be upon the field of Gettysburg so many of the men who actually fought here; every year, every month, even every week, sees their ranks thinned by death, and the time is not many years distant when the last of them shall have answered the final roll-call. For this reason, there was a peculiar fervor in all the exercises and a lingering reluctance to part, perhaps forever.

It also seemed like one last opportunity to mark in stone the importance of this place. "Gettysburg was never so crowded with people," The Star & Sentinel proclaimed, "and we trust it never will be so again." 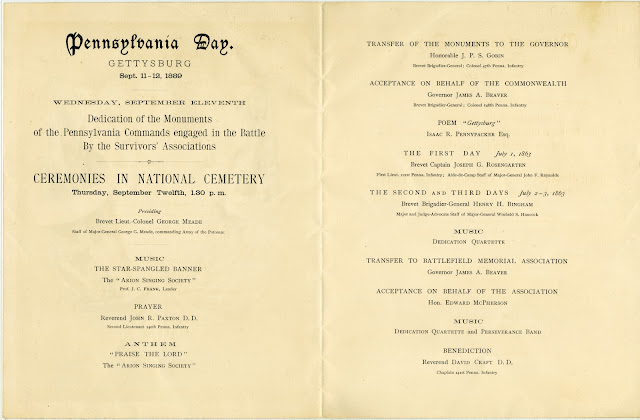 While the reports seemed to indicate a passing of an era - the case was overstated. In another column on the same page that it lamented the fading of the veterans, the Star & Sentinel noted that the 48th, 140th, and 150th New York had arrived in town to dedicate monuments. It went on to remind its readers that the Maine Monument Commission would arrive in early October to dedicate its monuments on the field.

Great gatherings of veterans would continue to come, through the 1890s, and into 20th century. For New York Day, for the dedication of the Pennsylvania Memorial, and for the 50th anniversary. And even when the veterans did fade away, the visitors would not. Just as Lincoln underestimated our ability to mark the importance of his words at the dedication of the National Cemetery, the Star & Sentinel underestimated the power of this memorial field that the veterans had created. Despite the paper's prediction that Pennsylvania Day in 1889 would be Gettysburg's biggest and last hurrah, today the borough of Gettysburg draws nearly 20,000 alone for bike week, and many thousands more for the annual battle anniversary. And in this year, the 150th since the battle of Gettysburg, it is estimated that nearly 4 million people will flock to the fields outside of town.

Today, this program for Pennsylvania Day tells us the story of one of the great veteran reunions at Gettysburg, where 46 monuments were dedicated, and the weather just wouldn't cooperate. More than that, it shows us the importance that those Pennsylvania veterans, and their comrades from other states, placed on the hallowed ground of Gettysburg, and how they wanted their youthful deeds to stand here for all time, etched in stone. In their efforts to memorialize their service, they created a sacred site unequaled in the United States.
Posted by Steve L at 7:53 AM