The Civil War in St. Louis

When I travel to new places I am always on the look out for interesting history. In the past few years I've been able to explore a bit of the history of St. Louis, a city I first visited back in 2009. Since then I've had the pleasure of taking several extended trips to the city, visiting my soon-to-be in-laws at Christmas and New Years for the past three years. 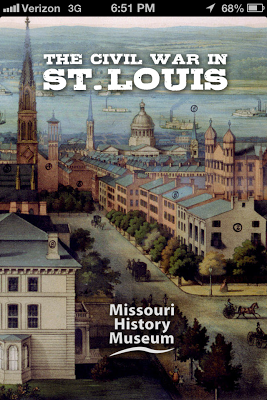 At Christmas in 2011 we visited the Missouri History Museum in Forest Park to take in a special exhibit, The Civil War in Missouri. This show, which is still on view through this coming June, does an excellent job showcasing the divisions the Civil War brought to Missouri.

This time around, I went to St. Louis planning to utilize the Missouri History Museum again to help me discover more about the city's wartime history. Earlier this year  I had downloaded the museum's The Civil War in St. Louis app, which is free for your iPhone. The app is designed to be a multimedia walking and driving tour of St. Louis's Civil War sites. It is based on the book The Civil War in St. Louis by William C. Winter. As we prepared for our annual trip, I began to explore the app a bit at home, to determine if it would be worth spending part of a day taking the tour. Unfortunately, many of the sites no longer stand, and given our full schedule I decided against the tour.

On the other hand, we often travel all around the city during our visits, and I knew the app contained a GPS enabled map. So throughout the week, as we zipped around the city for various activities, I sat in the back seat of the car with the app open, seeing what sites we might pass. There's a lot of great content in this program, but it is very buggy. It moves slowly and crashes frequently.

The app did help me make a few discoveries. During the week we passed by the Old Courthouse and the site of Camp Jackson, where on May 10, 1861 Captain Nathaniel Lyon surrounded a pro-Confederate militia, forcing them to surrender and thus securing St. Louis for the Union. On our way to First Night festivities we passed by the site of the U.S. Corral, where the Cavalry Bureau trained over 50,000 horses for service in 1863.

My most interesting discovery during the week though was two monuments located in Forest Park, just a few hundred yards away from the Missouri History Museum and a stone's throw from one another. These two monuments speak strongly to the divided nature of the war years in St. Louis, and also to the struggle over the memory of the war.

During the war, St. Louis was a city with divided loyalties. Many residents had southern roots. Yet the growth of finance and industry before the war created many strong ties to the North, and St. Louis's expanding population of German-born Americans remained staunchly Unionist and antislavery. The first monument we ran across spoke to this population of German immigrants - it was an equestrian statue of General Franz Sigel.

Sigel obtained his first military experience in his home nation of Baden, and participated in the 1848 Revolution. When the Revolution was suppressed, Sigel fled, eventually settling in New York in 1852. He made a name for himself in the German-American community, writing for the New Yorker Staats-Zeitung and the New York Times. In 1857, Sigel moved to St. Louis, and at the outbreak of the war proved instrumental in rallying German-born Americans to enlist. He became a Colonel in the 3rd Missouri and fought under Lyon. In August of 1861 he was promoted to Brigadier General, a position he earned in no small part to his value as a recruiter of German-Americans. Sigel served throughout the Civil War, but never gained much success as a military commander.

The statue was unveiled in 1906. It was sculpted by German Robert Cauer and cast at the Lauchhammer Foundery in Lauchhammer, Germany. The inscription at the base of the monument reads: "To remind future generations of the heroism of German-American patriots in St. Louis and vicinity in the Civil War of 1861-1865. General Franz Sigel."

Nearby, we came across the Confederate Memorial in Forest Park. At first, I was somewhat surprised to find a Confederate Memorial here. Missouri divisions ran deep, but St. Louis remained a Union stronghold throughout the war, despite the presence in the city of southern sentiments. When we arrived at the monument though, I began to understand: this monument, dedicated in 1914, sought to set in stone (quite literally) the Lost Cause mythology of the war.

The statue features bronze statuary depicting a southern family sending a young man off to war, above which sits a relief carving of the "Angel Spirit of the Confederacy." The back side of the 23 foot tall memorial features two engraved quotations. The first was written by Robert Cattlett Cave, a St. Louis minister who had served as a Virginia soldier in the war:


To the Memory of the Soldiers and Sailors of the Southern Confederacy.

Who fought to uphold the right declared by the pen of Jefferson and achieved by the sword of Washington. With sublime self sacrifice they battled to preserve the independence of the states which was won from Great Britain, and to perpetuate the constitutional government which was established by the fathers.

Actuated by the purest patriotism they performed deeds of prowess such as thrilled the heart of mankind with admiration. 'Full in the front of war they stood' and displayed a courage so superb that they gave a new and brighter luster to the annals of valor. History contains no chronicle more illustrious than the story of their achievements; and although, worn out by ceaseless conflict and overwhelmed by numbers, they were finally forced to yield, their glory, 'on brightest pages penned by poets and by sages shall go sounding down the ages.'

The inscription oozes Lost Cause mythology at its finest. We did not fight to protect slavery, this monument states, but rather to protect the right of self government guaranteed by the Declaration and the Constitution. And, it continues, we would have won if not for overwhelming numbers. If one inscription does not drive the point home - another inscription quotes Robert E. Lee:


We had sacred principles to maintain and rights to defend for which we were duty bound to do our best, even if we perished in the endeavor.

After viewing the monument, I hoped to find out more about how it came to be when I returned to New York. So far I have yet to locate any newspaper coverage of the construction and dedication, but I have found some information about the monument in Katharine T. Corbett's In Her Place: A Guide to St. Louis Women's History, published in 1999. The monument was dedicated on December 5, 1914, and was funded by the Ladies Confederate Monument Association of the United Daughters of the Confederacy. It's construction came not without a bit of controversy though. It took several years of advocacy on the part of the UDC to succeed in placing the monument. Government officials objected to any memorial that commemorated Confederate military forces.

To get around this injunction, the UDC held a public competition calling for designs that did not depict a soldier in Confederate uniform, nor any object of modern warfare. Models of each submission were displayed in the new St. Louis Public Library. George Julian Zolnay's winning design - with it's young man in civilian clothing headed off to war - met the requirements. The UDC raised the $23,000 for the monument and presented it as a gift to the city. Not wanting to expend any money on a monument to treasonous Americans, city councilmen passed an ordinance requiring the UDC to pay for the upkeep on the monument.

By 1914, the Lost Cause version of the Civil War was in the ascendancy. The following year would bring the release of Birth of a Nation. In 1917, the Virginia Memorial would be dedicated at Gettysburg, the first of the Confederate state monuments on the battlefield.

Today, the Confederate Memorial that stands in Forest Park not only honors the memory of the soldiers and sailors of the Confederacy. It also stands as a testament to the effort to win the battle over the memory and to rewrite the meaning of the war. Taken together with the monument to Sigel that stands not too far away - it reminds us that St. Louis was a divided city during (and after) the Civil War.