The Downfall of Colonel Sumwalt

Back in 2012 I wrote a few entries focused on the 138th Pennsylvania. Two companies - B and G - of this regiment were recruited from Adams County. My first post focused on the recruiting of the 138th, and the second introduced some of the Adams County faces in the regiment. Today, I thought I would continue my series on the 138th by exploring the fascinating story of the downfall of the regiment's first Colonel, Charles L. K. Sumwalt.

Writing on March 6th, 1907, Gettysburg resident J. Howard Wert recalled that Sumwalt was perhaps "one of the most unique characters that was ever projected into the activities and history of Adams county." Born in Baltimore in 1839, in his youth Charles Sumwalt apparently experienced a wayward life, and developed a poor reputation for morality. Sometime before the war, however, Sumwalt escaped Baltimore, wandered westward, and eventually ended up in Chicago. Here he became a member of Elmer Ellsworth's famous Chicago Zouaves. Sumwalt became fairly proficient in the zouave drill, a skill that would leave him in high demand when crisis erupted in 1861.

During his westward wanderings, Sumwalt also apparently straightened out his life, and felt called to become a Methodist minister. The outbreak of the Civil War found Sumwalt back on the East Coast as an itinerant minister on the Gettysburg circuit.

Zouave tactics became quite the fad that spring and summer of 1861, and in Gettysburg Sumwalt received a fair bit of adoration for his military experience. He and his company were praised at public ceremonies, including Gettysburg's Fourth of July Celebration that year. And yet, as others signed up and went to war, and as the state and federal government searched for any individuals with even a hint of military training to serve as officers, Sumwalt stayed behind. Wert, who claimed to have been more personally acquainted with Sumwalt than most of Gettysburg's residents, attempted to explain in his 1907 article:


This is what I learned of Rev. Charles L.K. Sumwalt. In personal courage, where physical danger was to be met, no man surpassed him and few equaled him. His moral courage was not on as high a ground, and bitterly was he aware of the fact. His will power was near the zero mark, and no man knew that so well as did Charles L.K. Sumwalt.

Initially, Sumwalt resisted the urge to sign up for the war, and instead continued his preaching. However, in the summer of 1862, opportunity came knocking at the door again. At Camp Curtin in Harrisburg the 138th Pennsylvania, including two Adams County companies, had been fully organized and yet had no obvious candidate for the Colonelcy. Regimental historian Osceola Lewis recalled:


The organization of the regiment being completed, it became necessary for it to have a responsible head, and soon the company officers were bustling about in search of a commander. Unlike most regiments, it had no embryotic Colonel whose "eagles" were fluttering in prospect before the muster-in rolls were filled; and the company commanders evidently being very modest and unambitious, not one of them showed aspiration to a higher position at that time.

However, the Adams county officers, being especially energetic, managed to secure a candidate, and presented him with many recommendations to their "brothers in shoulder-straps."

The first and chief reason given why he should be well qualified for the command of a regiment was that he was a "Minister of the Gospel" and a man of fine attainments.

Then also, he had experience in military matters, or, in other words, he drilled a volunteer company in the "Zouave Manual," and to do that he must be "posted in tactics."

His intellectual ability was great, his personal appearance imposing, and the officers of the newly formed 138th thought him to be "just the man."

In Gettysburg, the news of Sumwalt's acceptance of the Colonelcy of the 138th was greeted with great joy. "He possesses capital qualifications," the Compiler reported on September 1, "and the boys...may congratulate themselves on having so gallant a leader."

Unfortunately, the high esteem felt toward Sumwalt would not last. Upon leaving Camp Curtin, the 138th moved to Relay House - an important junction on the B&O Railroad, not far from Baltimore. Here the 138th would stay defending the railroad for the foreseeable future, and here Charles Sumwalt would become reacquainted with many of the ill influences and bad habits of his days in Baltimore.

As regimental historian Lewis recalled in 1866, Sumwalt "proved to be a wolf arrayed in sheep's clothing." At first, Colonel Sumwalt demanded the strictest discipline from his men. But soon, as the boredom of guard duty set in, Sumwalt removed his headquarters to the hotel at Relay House, and sunk into alcoholism and debauchery. Wert painted a picture for readers in 1907:


Over the wild orgies that glowed at the regimental headquarters let us draw the veil. There were escapades innumerable, and each more startling, more nerve thrilling than its predecessor. At midnight, of a night of storm, as the colonel would emerge from his tent, flushed with the debauch of the evening, he would order the entire regiment over miles of roads and fields in search of imaginary Rebels; and when the men would at length pause on the brink of a beetling precipice, the colonel, with sword waving high in the air, would urge his steed at breakneck speed, over the single foot plank that extended across the sleepers of a railroad bridge with a torrent thundering at a dizzy distance below; whilst his men were chilled with horror, believing each moment would be his last.

At first, only whispers of Sumwalt's conduct reached the homefront, such was the respect the men had for their Colonel. But soon word got out. Sumwalt's engagement to one of the leading young ladies of York Springs fell apart. He very soon thereafter married a women from Baltimore.

The military caught up with Sumwalt eventually, and he was summoned before a military court and convicted of conduct unbecoming an officer and a gentleman, as well as conduct prejudicial to good order and military discipline. On March 30th, 1863, Sumwalt was dismissed from the military service of the United States, and forever barred from holding an officer's commission.

The humiliated officer continued to sink into darkness. Though dismissed from the service, he remained for a time in the environs of his old regiment. On May 28, 1863, a member of the regiment wrote a sad account to Gettysburg's Star and Banner. Following the news of the death of Stonewall Jackson earlier in the month, Sumwalt had appeared in front of the men of Company B wearing a crape in mourning of the Confederate general. Told to take it off, Sumwalt dared his former soldiers to remove it themselves. "This," the paper reported, "was done in double quick time, and before this rebel was aware of it there was a guard over him." The former Colonel was imprisoned until he took an oath of allegiance. The paper did not report whether alcohol may have played a role in the incident. 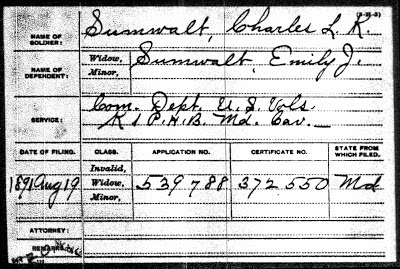 Incredibly, Charles L.K. Sumwalt's military service did not end with his disgraceful dismissal. In March of 1864 Sumwalt enlisted as a private in Company K of the 1st Maryland Cavalry, Potomac Home Brigade (Cole's Cavalry), and became a sergeant. He mustered out with the command at Harper's Ferry in June of 1865.

I don't know much about Sumwalt's postwar life. I could not locate Charles in any postwar census records on ancestry.com, though Baltimore City Directories in the 1870s listed his occupation as a plasterer. In 1891, his widow Emily J. Sumwalt filed for a pension - giving us some idea of when he may have passed away.

The story of Sumwalt's rise to military prominence, and fall to disgrace, is perhaps one of the more fascinating if lesser known stories of the Gettysburg community during the Civil War.
Posted by Steve L at 1:45 PM