"Men of Color to Arms:" Interpreting the USCT at Civil War Sites

One of my favorite panels at the Future of Civil War History Conference focused on the challenges and opportunities of interpreting the USCT at Civil War sites. Moderated by Kevin Levin, the panel featured Barbara Gannon of the University of Florida, Emmanuel Dabney of the Petersburg National Battlefield, Hari Jones of the African American Civil War Memorial and Museum, Joseph McGill of the National Trust for Historic Preservation, Jill Newmark of the National Library of Medicine, and Robert Sutton of the National Park Service. The panelists touched on a number of different themes during their hour and fifteen minutes on the stage in the CUB ballroom. They debated the effects of Glory on the public understanding of the USCT, they discussed popular misconceptions, and they urged audience members to utilize primary sources to understand the story of the USCT in the Civil War. Finally, they discussed the need to tell an inclusive story on battlefields, historic sites, and at museums. Black units were segregated, but their larger experience with northern armies was not. On battlefields, they fought side by side with white units.

I found the session thought-provoking, and the panelists extremely engaging, particularly Emmanuel Dabney of the Petersburg National Battlefield. In his short presentation, he told the audience three personal accounts of black soldiers, each relating incredibly different experiences. He closed with an intriguing question: as an interpreter, how do you balance different experiences, motivations and feelings among black soldiers? Personally, I think that recognizing that the motivations of soldiers are complex, and using the soldiers' own words, just as Dabney did, would make a great start. Dabney has his own blog, Interpretive Challenges. I intend to follow his thoughts in the future, and have added it to the blog roll to the right.

Hari Jones argued that the predominant and often inaccurate story presented about African American soldiers, largely built by the movie Glory, was one of victimization. It told of unequal pay, of white racism towards black troops and of doubts about the quality of black troops harbored by the political and military leadership of the North. Jones wanted instead for public audiences to understand the tremendous successes of black troops during the war, noting a long list of their accomplishments on the battlefield. This, he argued, was a tremendously uplifting American story.

Kevin Levin added some complexity to the discussion with his questions. At one point he asked the panel if the interest in framing a feel-good narrative, one that detailed freedom's inevitable march through history, prevented us from acknowledging more uncomfortable aspects of the USCT story. For example - where do stories of black troops offering no quarter to Confederates fit into that narrative? I think it's a fair point - our desire for a simplified version of the story often causes us to ignore contradictory or troubling sources.

Barbara Gannon also had thought-provoking comments, and focused on the challenges of memory and commemoration of USCT units. Postwar commemoration on battlefields was often state sponsored. With no state to fund their monuments, the USCT ended up being a sort of "orphan" in regards to memory. She suggested that perhaps the NPS should "adopt" the USCT, and take on the challenge of bringing their story to the public. I would argue that this is being done at many NPS sites today. But her point was well-made, and I began to wonder what more could be done to bring the USCT story to the forefront with public audiences. A unique place where this could be done is at Gettysburg.

Why Gettysburg, you might wonder. After all, no black units fought at the battle, what connections could there possibly be? Back in September I wrote about Gettysburg's Lincoln Cemetery. This seldom visited African American graveyard contains the remains of some 30 USCT veterans. Here in the town where a National Cemetery was dedicated as a final resting place for those who gave their last full measure of devotion; where the President declared a new birth of freedom for the nation, these 30 individuals, and other black veterans from later wars, were laid to rest, segregated in death as in life. The cemetery where these soldier resides bears the name of the man who called for that new birth of freedom. 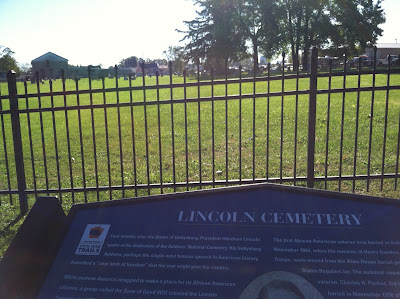 Tucked away in a remote corner of Gettysburg, the cemetery is not NPS property. Indeed, I have never been able to get inside because the gate is usually locked, though there are some interpretive panels outside of the cemetery. Perhaps designing some excursions to the cemetery and programs about these veterans might be a way of introducing the story of the USCT at the nation's most visited Civil War site. These 30 individuals might not have fought at Gettysburg, but they lived in the town and its surrounding area. And the story of their contributions to the Union war effort, and of the segregated nature of their final resting place, fits nicely into the ever-present sesquicentennial theme, "From Civil War to Civil Rights."
Posted by Steve L at 7:26 PM