The Postal Service Unveils a Stamp, and Attempts to Unravel a 150 Year Mystery

This past week, the Gettysburg Foundation and the U.S. Postal Service unveiled a stamp commemorating the 150th Anniversary of the battle of Gettysburg. The back of each sheet of stamps will show Matthew Brady's iconic photograph of Confederate prisoners on Seminary Ridge. 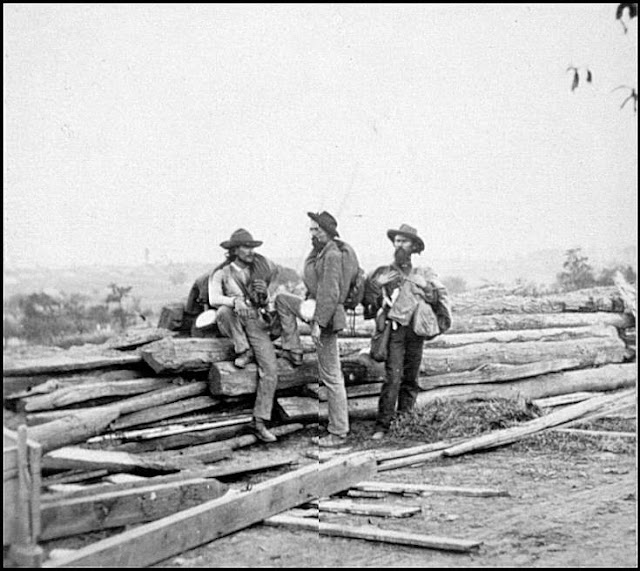 As part of the ceremony unveiling, the Postal Service had originally invited a Virginia barber named Clate Dollinger to speak at the ceremony, after they were informed that he was a descendant of not one, but all three of the prisoners pictured. Apparently, family lore had identified the man on the right as Dollinger's Great-Great-Grandfather, Andrew Blevins, a soldier in the 30th North Carolina. Dollinger claims that the soldier on the left is Ephraim Blevins, Andrew's son and a soldier in the 37th North Carolina. The middle soldier, Dollinger related, was John Baldwin, another relative and a member of the 50th Virginia.

If this story sounds too good to be true, there's a good reason for that. Within hours of the first article hitting the web numerous commentators poked big holes in Dollinger's story. Perhaps the biggest was the fact that Andrew Blevins died in June of 1863 of wounds received at the Battle of Chancellorsville. Dollinger responded to critics of his story by producing some photographic "proof", though I don't think William Frassanito would be impressed with his argument.. Al Mackey has covered the story very well on his excellent Student of the American Civil War blog, and includes a number of different links exploring the full story.

What I would like to know is who originally vetted Mr. Dollinger's story - did the Postal Service make this invite on its own or did The Gettysburg Foundation have any role. The Foundation eventually declined to have him speak, as they wanted to conduct more research into his story, but that decision seems to have come very late in the game.

Oral tradition has its role in history, but we should always be careful in putting too much faith in such stories. In my own family, I've been told for years that my Great-Great-Grandfather rode for the Pony Express. My Grandmother and my Great-Aunt always insisted that they had a newspaper clipping that told the whole story, but that they had lent it to someone who never returned it once upon a time. I've tried to verify as much of the story as possible through genealogical research, but I've turned up nothing. That being the case, I'm more inclined to doubt the full accuracy of the family story than to credit it.

Email ThisBlogThis!Share to TwitterShare to FacebookShare to Pinterest
Labels: Photography