While Gettysburg commemorates a Battle, Bendersville Remembers its Vets 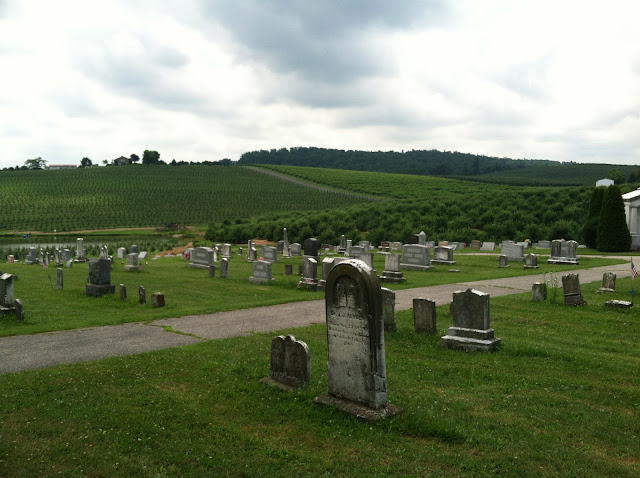 As some of you who may follow the blog know, my decision to head down to Gettysburg followed an unexpected invite to speak at a special event in Bendersville on Sunday, June 30th. The program was put together by Deb McCauslin of For the Cause Productions, and was designed to honor the memory of Company G, 138th Pennsylvania, which was recruited in Bendersville in the summer of 1862.

June 30th marked the 148th anniversary of the day that the soldiers of Company G returned to Adams County at the end of the war. After spending Sunday morning perfecting my remarks, I jumped in my vehicle and headed up to the Bethlehem Lutheran Church in Bendersville, not really knowing what to expect. I arrived about 30 minutes early, and already several had gathered. The church sits on a hillside, and behind the church is a beautiful cemetery. Many of the members of Company G (I believe Deb told me 18 or 19) are buried in this cemetery. Before the program, Deb and some others spent time locating each of the graves and placing an American flag. At 1 p.m. we got started.

I counted 32 attendees. As best I could tell, nearly all of them were local, and a majority of them descended from members of Company G. I spoke for about 20 minutes, describing the service of the 138th Pennsylvania. For many, the commemoration of the Battle of Gettysburg will mark the beginning of the end of sesquicentennial observances. That's unfortunate, because for those who fought, the war would continue. For the soldiers of the 138th, the war was just beginning. Prior to Gettysburg, the 138th spent ten months guarding the B&O Railroad and seeing no action. Three days after Gettysburg, they would join the Army of the Potomac. It was the beginning of two years of service during which the regiment saw action at the Wilderness, Cold Harbor, Monocacy, 3rd Winchester, Fisher's Hill, Cedar Creek, in the breakthrough assault at Petersburg, and at Sailor's Creek.

After my talk , descendants shared their own stories, photographs, and other documents with those in attendance. I was able to meet many of these descendants, including those of Captain James H. Walter, the man who served as company commander from August of 1862 until he was wounded at 3rd Winchester. I also met descendants of private Elias Hartzell. I used Hartzell's diaries and letters (which can be accessed at the Adams County Historical Society) frequently in my research. He was the last member of Company G killed when he fell at Sailor's Creek. When the program concluded, we all went outside to the cemetery to locate the graves of those members of the regiment buried there.

I found this small local remembrance was very powerful. While thousands packed Gettysburg 20 minutes to the south, I found it touching and meaningful that so many local descendants would see fit to gather to honor and remember the contributions of their ancestors, who did not fight at Gettysburg, but who suffered and sacrificed on many distant fields.
Posted by Steve L at 8:05 AM