Remembering Where We Are - Part 3

Today you can park your car at the Big Round Top parking lot, and set off down the hiking path towards the Slyder Farm. The path for the most part follows John Slyder's farm lane as it existed at the time of the battle. Along the way, you will pass through the D-Shaped Field, and can stop to admire the monument to the First Vermont Cavalry. Here Brigadier General Elon Farnsworth fell, riddled with bullets on the afternoon of July 3rd. Descending to the floor of Plum Run Valley, you can cross over the stream on a small foot bridge and visit the Slyder family's home. The spot remains peaceful even on the busiest of summer days, and the landscape is beautiful.

John Slyder did not share this experience when he returned to his home on July 5th, 1863. Instead, he found a scene of destruction that is difficult to imagine today. We can learn about his experience through reading the damage claim he submitted to the federal government. This is what the record states:

On the fifth day of July after the battle he returned to his House and found it filled of Union soldiers, that his bedding had been taken for wounded men and torn to pieces for bandages and his premises and utensils had been used by the soldiers and broken and carried away in the forgoing bill as mentioned – that his cattle had been killed and preparations made for disposing of two of them and the third cow was wounded so that he was obliged to kill her. That his property was of the value in the foregoing bill set down and that he has received no compensation for the same.

The total sum added up to $240 in damages to his personal property. Considering that three years earlier the Census valued John's personal property at $800, this represented a significant loss. Even so, it could have been worse - and for many of Slyder's neighbors it was. 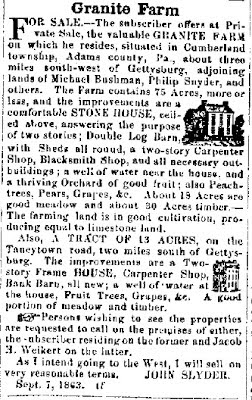 The family never received reimbursement from the government. Few Gettysburg civilians did. The events of the battle left John Slyder on the verge of bankruptcy. The armies had destroyed his fields, crops and livestock, and not enough time remained in the season to plant again. Instead, the family chose to sell the farm and move to Ohio. That fall, a sale notice appeared in the local papers for Granite Farm. We can surmise the family's desperate circumstances and desire to sell quickly by the last line of the advertisement: "As I intend going to the West, I will sell on very reasonable terms."

Sometimes when I tour the battlefield I find it all too easy to get wrapped up in tactics, strategy, and stories of courage. While these remain a central part of the story of the battle, we must also remember that the suffering and loss went beyond those who fought on the battlefield. It included those who lived there.
Posted by Steve L at 10:12 PM