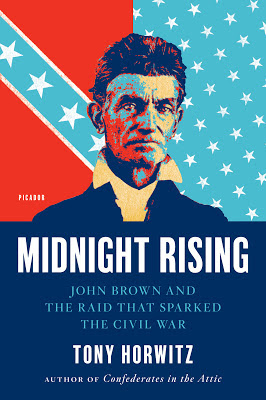 Midnight Rising: John Brown and the Raid that Sparked the Civil War
By Tony Horwitz
Published in 2011
Picador

Yesterday before the onslaught of family I managed to finally put away the epilogue of Midnight Rising: John Brown and the Raid that Sparked the Civil War. Horwitz, an American journalist and writer, is best known as the author of several travel narratives with a historical spin, including Confederates in the Attic: Dispatches from the Unfinished Civil War and A Voyage Long and Strange: On the Trail of Vikings, Conquistadors, Lost Colonists, and Other Adventurers in Early America.

With Midnight Rising, Horwitz goes in a different direction: narrative history. Yet you shouldn't worry about the author leaving his comfort zone. If you enjoyed reading Confederates in the Attic, you will instantly recognize his riveting writing style once again.

This book is not a full biography of Brown . Horwitz uses the first fifty pages to introduce the reader to Brown and set the context of his story. He then launches into a rich and full narrative of Brown's raid on Harpers Ferry - from the planning and fundraising stages all the way through to the trial and execution of the conspirators. This book serves as an attempt by Horwitz to grapple with the meaning of Brown's raid - what did the abolitionist really intend to accomplish with this grandiose plan?

In the introduction to the book, Horwitz argues that most histories gloss over the Harpers' Ferry Raid, treating it as a "speed bump"--to use his own words--on the road to Fort Sumter. He then lays out what he views to be the raid's importance:


Harpers Ferry helped propel Lincoln to the White House, where he would ultimately fulfill Brown's mission. The midnight rising in Virginia also embroiled a host of future Confederates. Robert E. Lee and J.E.B. Stuart led troops against Brown; Thomas 'Stonewall' Jackson guarded the abolitionist. So did John Wilkes Booth, who loathed Brown but took inspiration from his daring act of violence. Meanwhile, in Congress, Jefferson Davis cited the attack as grounds for Southerners to leave the Union, 'even if it rushes us into a sea of blood.' Harpers Ferry wasn't simply a prelude to secession and civil war. In many respects, it was a dress rehearsal.

This was true not only for participants but for the millions of Americans who followed the events from afar, through telegraphic dispatches that made Harpers Ferry one of the first breaking news stories in the nation. The debate and division stirred by the crisis unsettled decades of compromise and prevarication. On the subject of John Brown, there was no middle ground. North and South, citizens picked sides and braced for conflict that now seemed inevitable.


I found the detailed, almost minute-by-minute account of the raid itself the most engrossing portion of the book. In all my readings on the Civil War era, I cannot remember reading an actual narrative of how the raid unfolded. Most accounts provide only two basic details: 1) Brown and his men took control of the arsenal, fortifying themselves in the engine house; and 2) Townspeople surrounded the engine house, and eventually U.S. Marines stormed the "fort."

Horwitz's narrative provides a much fuller picture of the raid, and raises some important questions. Examining the historical evidence, including various eye-witness accounts and Brown's own writings from before and after the raid, Horwitz attempts to discover what Brown truly intended. He makes a strong case that the plans understood by Brown's conspirators, and the actions Brown took on the day of the raid, do not sync with each other.

The author's conclusions leave open an intriguing question: did Brown intend to fail all along? Certainly, the book makes a convincing case that once the abolitionist had failed, Brown keenly understood that he could accomplish a great deal by becoming a martyr to the abolitionist cause.

To sum up - I would highly recommend this book. If you like historical narratives, you will find Horwitz's description of the raid enthralling. In addition to the enjoyable read, the author succeeds in putting the raid back into its rightful place as a central event of the secession crisis.  After all, the 1860 Democratic Convention, which famously featured a walkout of Southern delegates, took place just 5 months after Brown's hanging, and only one month following the hanging of Albert Hazlett and Aaron Stevens, the last of Brown's raiders executed.
Posted by Steve L at 9:52 AM