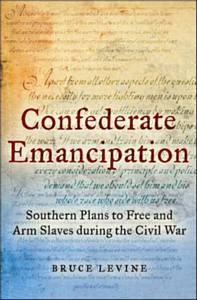 During the bustle of the holidays I finished off Bruce Levine's Confederate Emancipation, a fascinating book and one that sheds a tremendous amount of light on how the questions of slavery and emancipation, in addition to causing the Civil War, also contributed greatly in the South's downfall.

The book, as its title implies - delves into Confederate plans to utilize slaves as soldiers. Obviously, theses plans do not refer to the baseless assertions of modern "heritage" groups that thousands of slaves fought for the Confederacy, but rather to the belated attempt by the Confederate government to arm slaves in March of 1865.

The late-war plan of the Richmond government to free and arm the male slave population of the South is a topic that has received a great deal of attention over the years. Levine introduces his study with an overview of the historiography of the topic, and explains how after the war many often used the episode as evidence to prove that the Confederacy did not fight purely for the protection of slavery. He then lays out his own argument:


Proposals to arm and emancipate slaves...arose because the Confederate war effort was plaqued by an increasingly critical complex of military, political, and morale problems. Individual southern army officers and political leaders began to contemplate the use of black troops only because (and only when) they recognized the depth of the crisis into which these difficulties had plunged the southern war effort. Both Confederate armies and the institution of slavery were in serious jeopardy by the second half of 1863. Those developments--and the interrelationship between them--argued in favor of offering freedom to bondsmen in exchange for service as southern soldiers.

Levine continues by stating that Confederate proposals "did not signify a radical revision or repudiation of the basic goals for which southern leaders went to war." Rather, these proposals represented a last ditch effort to salvage whatever they could of a economic and social structure that the northern war effort had already compromised, and defeat would utterly destroy.

The book begins by examining the origins of plans to emancipate and arm male slaves. Levine describes early proposals to arm the slaves - from 1861 to 1864 - advanced by individuals such as Patrick Cleburne and Richard Ewell. He also details the overwhelming backlash against these proposals led by prominent political and military leaders as well as the Southern press. In the fall of 1864 - facing an increasingly bleak military situation and a severe shortage of man-power, many (including the Davis administration) reversed their stance on the issue.


By deserting their masters, by aiding and joining Union armies, black southerners aggravated Confederate manpower problems while also suggesting a way to resolve them. Only by placing slaves in gray uniforms, it seemed increasingly clear by 1864, did the South have a prayer of fielding armies large enough to avoid defeat. But blacks' conduct during the war constrained Confederate planning even further than that. It forced Confederate realists to recognize that only by promising liberty to such slaves could they even hope to enlist such assistance.


While some have argued that plans for arming the slaves prove that by the end of war independence had become a more important war aim for the South than the defense of slavery, Levine vehemently disagrees. The combination of slaves deserting their masters and North's adoption of emancipation had all but destroyed slavery in many areas of the South. Wherever northern armies march, there slavery had ended. In the face of this, many Confederate leaders took up their second line of defense. They could not save slavery it seemed, but they believed they could still win the right to define what freedom meant for African Americans. Concerned that a complete northern victory would mean a loss of political control and full equality for blacks, white southerners were willing to offer limited emancipation to male slaves in the hopes that the increased man power would help them win the war, and maintain political control.

Their hopes of course were dashed. First, the Confederate offer of emancipation was a bad deal for black southerners, who recognized it for what it was. Why would male slaves fight with the Confederacy for their own freedom when victory would ensure that their families would remain slaves? Second, the proposal to free and arm slaves remained controversial right to the death of the Confederacy, and the only bill that ever passed through congress lacked the teeth to succeed. It did not require slaveholders to allow their slaves to serve, and many chose not to. Indeed, in those areas that the Union army had not penetrated, many slaveholders held out hope that they might be able to save their slave property through a reunification with the north through negotiation. In withholding their permission to have their slaves enlist, these masters ultimately proved that their loyalty lay not with the Confederacy but with the institution of slavery.


I thoroughly enjoyed this book, and found the authors conclusions convincingly argued. The book is not long as Civil War books go, a mere 164 pages, but the writing style can be a bit dense at times. Levine is a professor of History and African American Studies at the University of Illinois. He has a brand new book being released this very week entitled The Fall of the House of Dixie: The Civil War and the Social Revolution that Transformed the South. I for one will be adding it to my to-read list.