The Army of the Potomac's French Poet-Warrior

For this week's Material Culture Thursday I highlight one of my favorite artifacts from the New York State Museum's current Civil War exhibit - "An Irrepressible Conflict": The Empire State and the Civil War. I reviewed the exhibit in a post last week. Today's item - an officer's commission belonging to Philip Regis de Trobriand, one of my favorite personalities who fought in the Battle of Gettysburg. 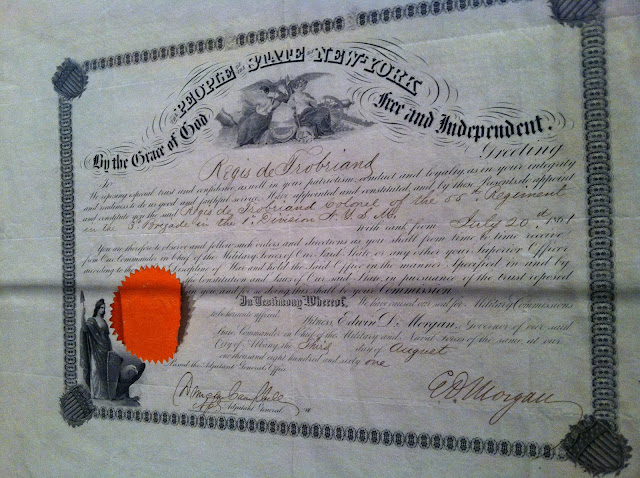 I have always found de Trobriand one of the more fascinating characters in the war. Born on June 4, 1816 at the Chateau des Rochettes near Tours, France, he was the son of a baron and general in the French army. As a young man Regis - he dropped his first name when Louis Philippe took the crown - studied at the Universities of Tours and Poitiers, and aimed to become a lawyer. He was also known to have participated in duels.

De Trobriand dabbled in poetry as well, and in 1840 published a novel entitled Les Gentilshommes de l'Ouest. The following year, the aristocrat traveled to America for the first time, where he met his future wife, a New York heiress named Mary Mason Jones. The young couple traveled through Europe after their marriage, lived for a time in Venice, but eventually returned and settled in New York in 1847. In New York the Baron focused on his literary work, becoming a regular contributor to the French newspaper, Le Courrier des Etats Unis, as well as other French language publications.

In July of 1861, de Trobriand became a citizen of the United States and received permission from the War Department to recruit a regiment for service. That regiment, the 55th New York, was known as the Lafayette Guard. Recruited in New York City, most of the men in the regiment were French. De Trobriand led the regiment on the Peninsula and at Fredericksburg. After that battle the depleted 55th merged with the 38th New York, which de Trobriand led at Chacellorsville. Before Gettysburg, the Third Corps underwent a reorganization and de Trobriand received command of the Third Brigade of the First Division.

De Trobriand might have been an eccentric French aristocrat with literary flare, but by July 2, 1863 he had also become a battle-hardened combat commander in the Army of the Potomac. When Daniel Sickles took up his forward line on that day, de Trobriand found himself with a difficult if not impossible assignment. Maj. Gen. David Birney's First Division was tasked with covering a huge amount of ground, stretching from the Peach Orchard salient, manned by the division's First Brigade, to Devil's Den, covered by the Second Brigade. De Trobriand's five regiments would have to cover the vast space between.

The ground assigned to de Trobriand was rocky and wooded. The west branch of Plum run ran across his front and beyond that the cleared fields of the Rose Farm stretched to the Emmitsburg Road. Behind de Trobriand the six Napoleons of Battery D, First New York Light unlimbered in the Wheatfield. With his 3rd Michigan out on the skirmish line, de Trobriand positioned his other four regiments as best he could on the Stony Hill. He would not be able to stretch his line to connect with the flanks of either the First or Second Brigades. If the attack came to his front, he would have to depend on covering his own flanks, or hope for reinforcements.

When the Confederate attack began against Devil's Den that afternoon, de Trobriand's forces would be further depleted. He would lose the the 40th New York (the Mozart Regiment), ordered away to reinforce the Second Brigade's left flank at Devils Den. He would also reposition the 17th Maine further to the left, to occupy a stonewall on the southern edge of the Wheatfield and assist the right of the Second Brigade's line.

With the 17th along the stonewall, and the 5th Michigan and 110th Pennsylvania in line of battle along the branch of Plum Run, de Trobriand's men went into action first against Anderson's Georgia brigade, and later against Joseph Kershaw's South Carolinians . His three regiments would receive reinforcements in the form of two regiments from another 3rd Corps brigade, and two brigades from Barnes' 5th Corps division. But these reinforcements would soon fall back in the face of the Confederate attack, forcing de Trobriand and his men to do the same.

Facing two Confederate brigades, de Trobriand and his men could not hold the Confederates off for long. Yet they did delay the Confederate advance long enough for more federal reinforcements to reach the scene and counterattack. The assaults and counter assaults in the Wheatfield would continue, though the Third Brigade's involvement was over. The regiments that fought in the Wheatfield zone under de Trobriand's command lost 340 out of a total strength of 955 - roughly 36% of their strength.

After Gettysburg, de Trobriand briefly left the army after the senate did not confirm his promotion to Brigadier General in the fall of 1863, despite the recommendations of his superior officers. In January of 1864, the promotion came through and de Trobriand was assigned to command the defenses of New York. He would eventually find his way back into the Army of the Potomac, where he commanded the 1st Brigade, 3rd Division, 2nd Corps - troops that belonged to the old 3rd Corps. He remained in this position until the end of the war.

After the war de Trobriand was brevetted a Major General for meritorious conduct and mustered out of the volunteer service, but his military career did not end. After a leave of absence to write memoirs of his wartime service, de Trobriand returned to the regular army as a Colonel. He served at various posts until 1879.

De Trobriand's commission in the State Museum's exhibit is presented in a section discussing New York's foreign-born population and the importance of its involvement in the Civil War. This French Baron, poet and novelist certainly ranks as one of the more fascinating immigrants that served in the Army of the Potomac during the war.
Posted by Steve L at 12:18 PM