Today I finally got a chance to stop by the New York State Museum in Albany to take in An Irrepressible Conflict: The Empire State in the Civil War. The show opened back in September, and will remain on view until September of 2013. The exhibition takes up 7,000 square feet of space in the museum, and features an incredible array of artifacts drawn from the collections of the State Museum, the New York State Library and Archives, and from institutions across the state. These artifacts are the great strength of this exhibit, and are worth the visit on their own (admission is free by the way). In an introductory panel, Lincoln scholar Harold Holzer tells us:


The story of the state’s crucial role in winning the Civil War and ending slavery has never before been fully told through the artifacts of the era. Together, those assembled for this exhibit show why New York—even then, even in the crucible of military and social revolution—was truly the state of the Union.


The show divided into three basic themes, Antebellum New York, The Civil War, and Reconstruction & the War's Legacy. The section on Antebellum New York was clearly the strongest section, and perhaps the exhibit dwelt too long on this pre-war period. As I looked at the layout, it appeared that this one section occupied fifty percent of the floor space. The curators chose to start their story by discussing slavery in New York, and the fight within the state to emancipate its slaves and outlaw slavery in the early nineteenth century. The section then goes on to give a nice overview of the state before the war, and how it was rapidly changing. It covers the transportation revolution, the influx of immigrants,  the Second Great Awakening and the rise of the abolition movement. It also highlights prominent individuals in New York during this period, such as William H. Seward, Frederick Douglass, Gerrit Smith, John Brown, Sojourner Truth and Elizabeth Cady Stanton. The first section ends with a discussion of the election of 1860 and New York's divided views on slavery.

Section Two focused on the four years of war, and each year received its own sub-section. Within these sub-sections, the curators attempted to tell the story of the war from many different vantage points: they highlighted famous New Yorkers and famous New York regiments, discussed the role of New Yorkers at important battles, delved into the economic impacts of the war with regard to the production of war materials, and touched on other topics such as medicine, conscription, emancipation and New Yorker reactions to emancipation, the wartime service of New York's African American population, wartime politics, and much more.

The final section, Reconstruction and the War's legacy, very briefly looked at the complicated legacy of Reconstruction, and how the war affected New Yorkers in later years. It highlighted veteran efforts to memorialize their service, and brought the story of the Civil War into the 20th century by highlighting the efforts of New Yorkers in the Civil Rights movement, and acknowledging the history of the Ku Klux Klan in the state.

Beyond its rich artifact collection, the exhibit does have some other strengths. While I am no exhibit designer myself, I did enjoy the show's look and feel. I particularly liked the use of wall color to clearly delineate each of the three major themes. 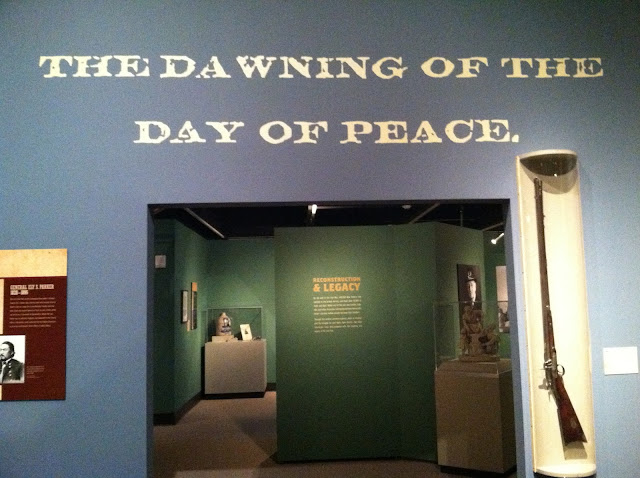 On the other hand, I also noticed some major weaknesses. In an effort to tell a broad story, the exhibit failed to go into great depth on any particular subject, and it also spent an inordinate amount of time on prewar themes and events. The building of the Erie Canal from 1817 to 1825 seemed to received more space than the New York City Draft Riots, the largest civilian insurrection in United States history. The controversial election of 1876, which featured New York's Democratic Governor Samuel Tilden and brought about the end of Reconstruction, earned just one sentence in the entire show.

The exhibit did not have much of an exploration of what life was like for New York women on the homefront. It also lacked any analysis of why New York soldiers chose to fight. Each topic that was explored, such as the role of specific regiments in major battles, or New York reactions to Emancipation, seemed to only scratch the surface before moving on to another topic.

I also found a number of small factual errors increasingly annoying as I went through the exhibit. At first I felt nit-picky. But the more they piled up, the more I began to question the depth of research that went into the exhibit. A few examples I noted:
All of these I realize are nit-picky details. Yet I would expect more of a major exhibition - and these readily identifiable errors led me to question the depth of research conducted.

One final critique I have is that the exhibit is in no way interactive, and I saw little effort made to improve the overall learning experience for children or for individuals who are hands-on learners. At the very least, the curators missed an great opportunity to allow visitors to engage with incredible materials available at the museum, as well as at the New York State Library and Archive. I know the State archives have phenomenal resources related to New York's regiments and soldiers, and I know that they have a good deal of this information readily available online. A few simple computer stations at the end of the exhibit would have allowed visitors to explore more information about particular regiments, or even look up an ancestor who may have fought for New York during the war.


I found myself comparing this exhibition to two others that I have seen: the New York Historical Society's New York Divided show back in 2007, which focused on New York City in the Civil War, and the Missouri History Museum's The Civil War in Missouri, which I saw in 2011 but is still currently on view. The quality and significance of the artifacts brought together for An Irrepressible Conflict equaled or exceeded these two exhibitions. And yet, I found the New York State Museum's show lacking in the depth of the story that it tells. Perhaps if the curators had narrowed their story and approached their main themes by focusing on a handful of engaging New York personalities who experienced the war, they might have had the ability to tell a richer story.

Despite the weaknesses, the show is well worth a visit to the New York State Museum.

Email ThisBlogThis!Share to TwitterShare to FacebookShare to Pinterest
Labels: Exhibitions