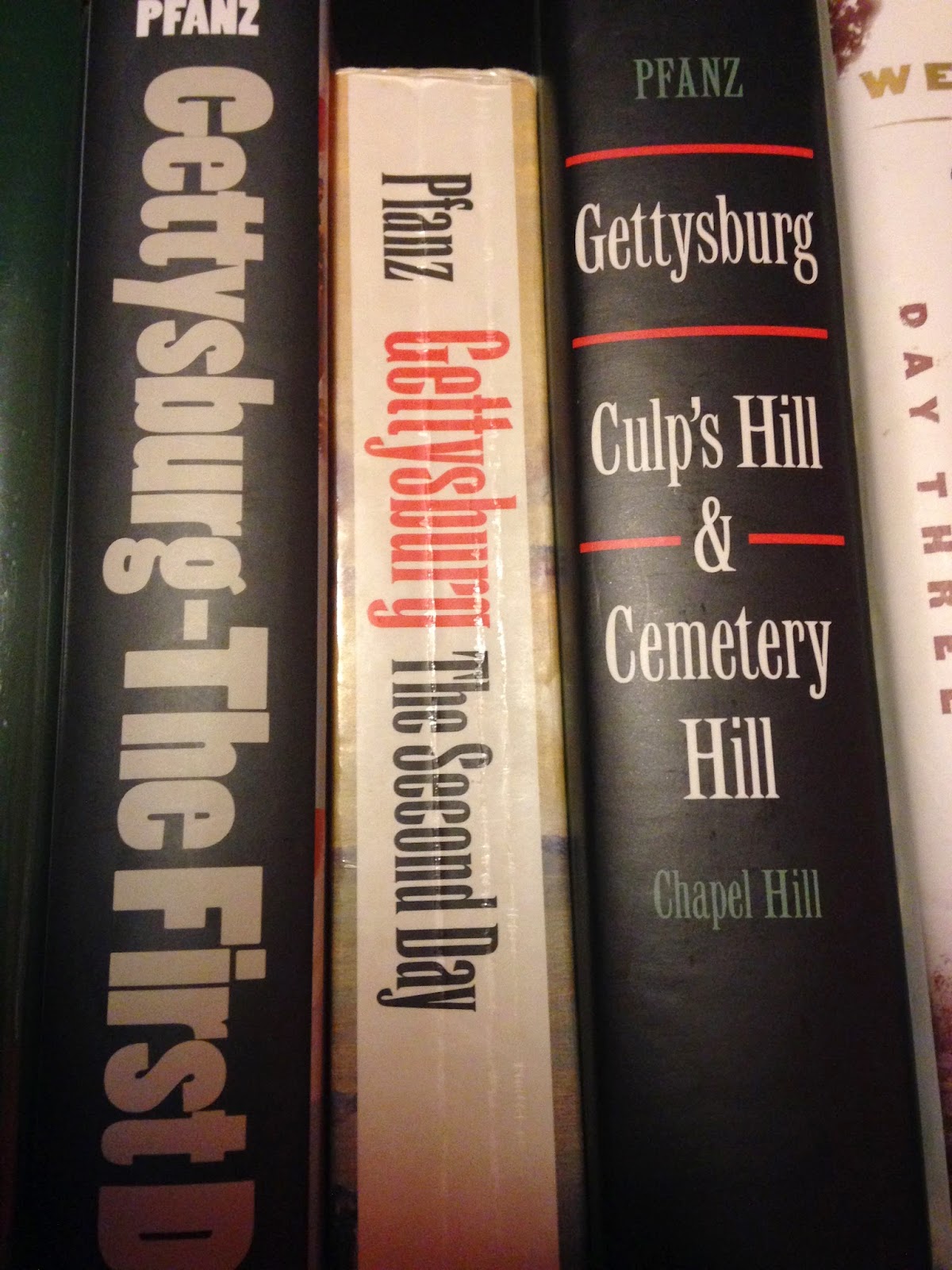 Today, we learned of the passing of an eminent historian, Harry Pfanz. Mr. Pfanz served for ten years as a historian at Gettysburg National Military Park. He later served as the Superintendent of the Jefferson National Expansion Memorial in St. Louis, and as the Chief Historian of the National Park Service. His three-part tactical study of the battle of Gettysburg, in my opinion, has no equal in the scholarship of that battle. Personally, though I've never met Mr. Pfanz, his books played a pivotal role in my developing interest in the Civil War, and in setting my eventual career path.

My interest in the Civil War was kindled in 1998. That summer, while visiting my grandparents in Ocala, Florida, I picked up and read The Killer Angels. I spent long hours that week on their porch swing out front, breezing through the book. During the long, two-day car ride back north I barely put down Gods and Generals, Jeff Shaara's prequel to his father's classic. Within a few weeks, I had the first volume of Shelby Foote's The Civil War: A Narrative in hand. The Civil War quickly became my obsession.

A year later, on my 16th birthday my parents took me on my first trip to Gettysburg. It was mid-August, and by the time we arrived at the Visitor Center to arrange for a Licensed Battlefield Guide, none were available for the rest of the day. I wasn't worried. After all, I had read The Killer Angels; I knew this battle. We spent two days driving around the battlefield and the town, most of our time spent on Little Round Top, at the Angle, and on Confederate Avenue. We attended ranger programs at the Peach Orchard and at the High Water Mark. We somehow missed Devil's Den, and probably Culp's Hill too - I can't rightly remember. My parents also drove me through a college that I didn't know existed - Gettysburg College. How cool, I thought, would it be to spend four years here?

After that first trip, my passion for Civil War history grew. I picked up Longstreet's memoirs and Freemantle's Three Months in the Southern States. I read James McPherson's Battle Cry of Freedom, Stephen Sears books, and continued to plow my way through Shelby Foote's 3,000 unsourced pages. By my junior year, I had convinced my parents that it was time to return to Gettysburg, this time on a college visit.

After two years of study, I began to realize some of the gaps in my Civil War knowledge and understanding, if not their massive extent. With Gettysburg in particular, I recognized how little I had actually seen on my first trip. For this second visit, I needed a plan. We hired a Licensed Battlefield Guide, and our whirlwind two hour tour this time included Devil's Den and Culp's Hill. We also stopped in to the Eastern National Bookstore, and I made several purchases that, looking back, signaled the beginning of my serious study of at least the battle of Gettysburg, if not the Civil War. First, I purchased Edwin Coddington's The Gettysburg Campaign: A Study in Command. I also purchased John Imhof's Gettysburg Day Two: A Study in maps. Finally, I picked up two books by Harry Pfanz, Gettysburg: The Second Day, and Gettysburg: Culp's Hill & Cemetery Hill.

I dove right into Mr. Pfanz's work, and they instantly became my favorite of all time. Anyone familiar with Mr. Pfanz knows the exacting detail, superb research, and rich prose that marked his writing style. I always loved the way he wove miniature biographies of important officers seamlessly into his battle narratives.

At the time I first read these books, I was looking at colleges and considering my career path. In addition to some great history teachers, I credit Mr. Pfanz with introducing me to many important lessons about the craft and process of history. Most importantly, perhaps, I learned that while I thought I knew everything about the battle of Gettysburg, I hadn't scratched the surface. I began to realize that the more of history you learn, the more you become aware of what you don't know. It's a humbling experience, but one that is important for all historians to learn, and one that I've learned repeated throughout my life.

On my shelf of Civil War literature, Harry Pfanz's work--including his later volume, Gettysburg: The First Day--stand out among all the rest. Most books I've read once and set back on the shelf. Some I've donated to libraries to make room for new works. Not Pfanz. I've read very few Civil War volumes more than once, but I've read all three of his Gettysburg studies multiple times. Beyond that, they have been my constant companion on the battlefield, especially when my dream of spending four years in Gettysburg became a reality. Each year in late August I had to decide which handful of Civil War books deserved a portion of my limited space in my dorm room. Pfanz's books made the cut every time. And on the occasional spring and fall afternoons where I felt caught up in my classwork, I'd throw a volume into my book bag and hike out to the battlefield, find a spot under a shaded tree or at the base of a monument, crack open the book, read, and visualize the battle. It was the best way to learn, and to understand. 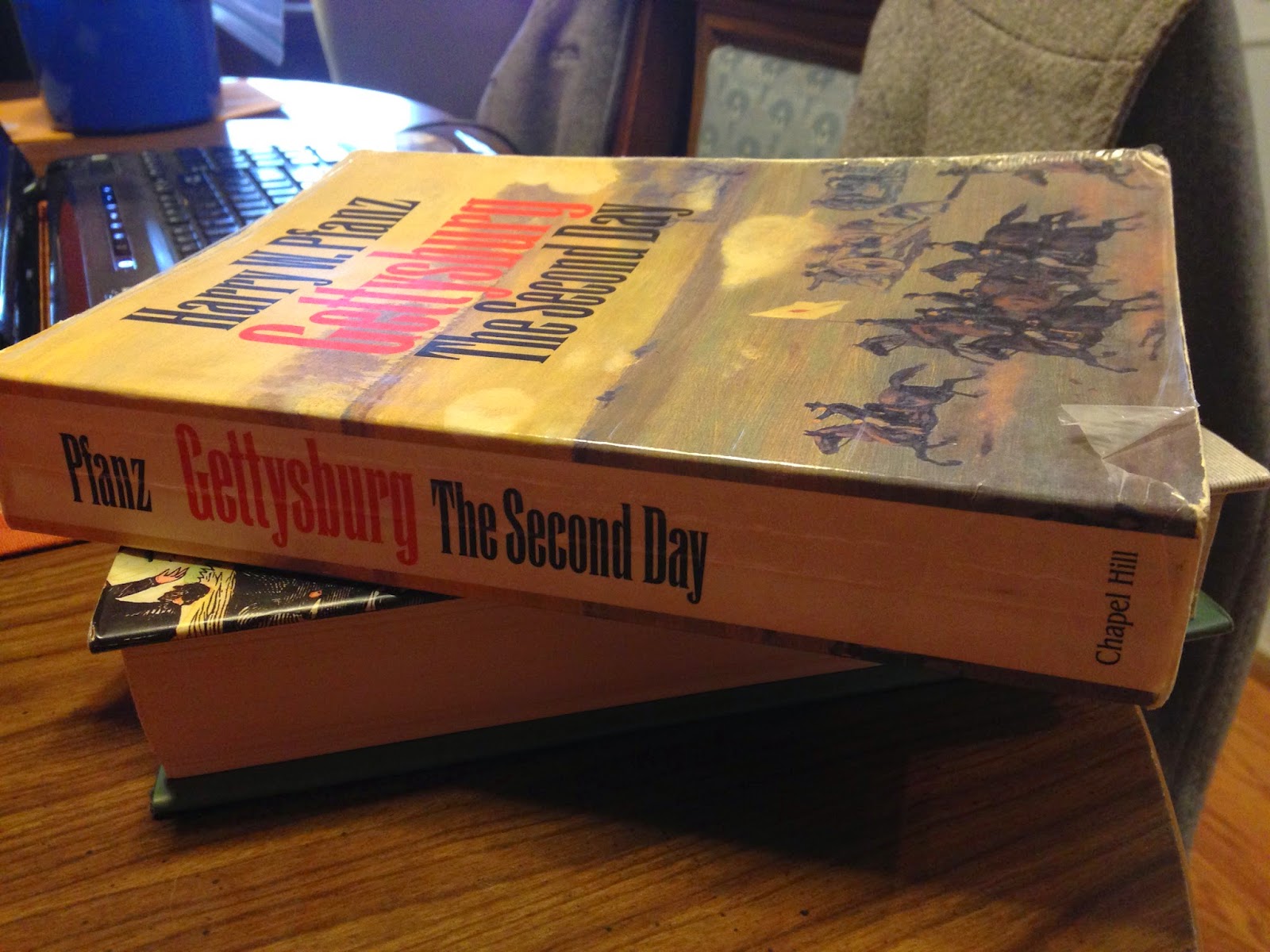 This morning, when I learned of Harry Pfanz's passing. I pulled out Gettysburg: The Second Day. Its worn and beaten cover, its cracked spine, and its coffee-stained pages attest to the use I've gotten out of it. Someday, I may have to replace this volume, but I hope not. The wear and tear remind me of the time in my life when I began to make the transition from amateur Gettysburg enthusiast into a historian.