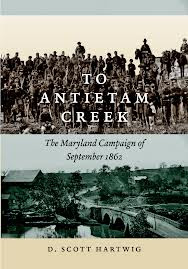 To many scholars, the Battle of Antietam represents one of the crucial turning points of the Civil War. In addition to earning a sad distinction as the bloodiest day in American history, the battle's connections with Lincoln's Emancipation Proclamation highlight it as a dividing line between a war for the Union as it was, and a war to redefine freedom. And yet, far fewer book-length studies exist for the Maryland Campaign than for Lee's second invasion of the North. Standard works include Stephen Sear's Landscape Turned Red (1983) and Joseph Harsh's Taken at the Flood (1998). John Michael Priest's Antietam: The Soldiers' Battle (1994) attempts to tell the story from the perspective of the common soldiers on the ground, and many other works explore different aspects and personalities of the battle and the campaign. More recently, Richard Slotkin's The Long Road to Antietam (2012) sought to interweave the Maryland Campaign with the story of the political battle between McClellan and the Lincoln Administration over the direction of the war effort.

With this first of two volumes, Scott Hartwig has contributed a book which will surely join the pantheon of the best works on the Maryland Campaign. 650-page books rarely fit into the "can't put it down" category, but this one did. To Antietam Creek features stunningly detailed accounts built through an extensive mining of primary source manuscript collections and what must have been long hours of traversing the landscape at several battle sites to understand terrain. Sometimes books that are so rich in detail collapse under the weight of their own thoroughness. However, Hartwig's writing skills also shine here, and his narrative captivates the reader, bringing the drama of the campaign to life.

In this first volume, Hartwig sets out to raise the profile of the Maryland Campaign's other major actions. While the Battle of Antietam saw tremendous bloodshed and brought about war-altering results, it also overshadowed the engagements and actions of Union and Confederate forces at Harpers Ferry and South Mountain. The events of the Maryland Campaign leading up to the Battle of Antietam had significant consequences, and Hartwig believes that many accounts of the Campaign overlook or ignore their import. He begins his narrative in the aftermath of the Union disaster at Second Manassas, and details George McClellan's fall from the Lincoln administration's graces that summer, and his sudden return to power in the crisis of September of 1862.

After setting the scene with a review of the strategic picture militarily and politically, Hartwig introduces his readers to both armies. He provides a extensive analysis of strengths and weaknesses, comparing each army's leadership down to brigade level, staff capabilities, and the organizational structure of infantry, artillery, and cavalry. Here Hartwig challenges popular misconceptions. First - he argues that the numerical superiority of the Army of the Potomac, especially at the outset of the Maryland Campaign, has been greatly overstated. Citing the continued grip of the Lost Cause over the historiography of the campaign, Hartwig quotes a Union soldier who complains: "A few more years, a few more books, and it will appear that Lee and Longstreet, a one-armed orderly, and a casual with a shotgun fought all the battles of the rebellion, and killed all the Union soldiers except those who ran away." Second, Hartwig gives a bit of respect to the performance of Union cavalry during the Maryland Campaign. While traditional narratives describe the Army of the Potomac's horse soldiers as coming of age in the Battle of Brandy Station and after, Hartwig gives credit to Colonel John F. Farnsworth's brigade, and notes that during this campaign it performed well when used appropriately.

A review of both armies complete, the rest of the book provides an in-depth narrative as the Maryland Campaign unfolds, including a ground-level view of the battles for Turner's Gap, Fox's Gap, and Crampton's Gap, as well as Stonewall Jackson's operations against Harpers Ferry. The author demonstrates a keen understanding of the impact of terrain on the outcome of engagements. He also excels when assessing the leadership qualities of commanders at the operational level, examining the contributions of regimental commanders as well as army commanders. At South Mountain, Hartwig provides a mostly positive review of performances within the Army of the Potomac, and a negative (if sympathetic) analysis of D.H. Hill's performance in command of Confederate forces. At Harpers Ferry, readers come to understand the excellent cooperation and daring of Confederate forces, and the utter ineptitude of Dixon Miles commanding the Harpers Ferry garrison. The Union capitulation here, Hartwig points out, is the largest surrender of Union troops in the war, and the largest surrender of United States forces up until World War Two. The author argues that Stonewall Jackson's success here should rank as one of his greatest achievements, given its difficulty and the magnitude of the results. He believes the outcome at Harpers Ferry has lost its "glow" because Antietam followed so quickly on its heels. Had the Confederate army withdrawn after the success here, and not fought at Antietam, the campaign may have been viewed as a Confederate success. Hartwig reserves especial praise for Lafeyette McLaws and his handling of a delicate situation in Pleasant Valley. He reserves great scorn for the commander of the Army of the Potomac's Sixth Corps, William Franklin. Franklin's delays on September 15th squandered a brilliant opportunity his own soldiers earned by storming Crampton's Gap the evening before.

To close the book, Hartwig brings both armies to the banks of Antietam Creek, reviews in detail the comparative strength and deployment of troops on September 15th and 16th, and covers the opening clashes in the East Woods that night. In assessing Lee and McClellan, the author gives mixed reviews. He credits McClellan with commendable efficiency in storming the gaps of South Mountain, and dishes out partial blame for his failure to lift the siege of Harpers Ferry to his subordinate, William Franklin. Hartwig also rejects the idea that the Army of the Potomac could have attacked Lee on the afternoon of September 15th, stating in a footnote: "Writers who have proposed the idea that McClellan could have attacked Lee on the 15th have no concept of the time needed to march an army of 70,000 men approximately twelve miles, reconnoiter the enemy's position, issue orders, and deploy for battle." However, Hartwig does take McClellan to task for wasting precious time on September 16th, and for his clumsy preparations to assault Lee's positions that afternoon and evening. He also questions whether McClellan was wise to break up his army's wing structure on the eve of battle without good reason.

Turning to Lee, Hartwig credits the Virginian's audacity and his desire to maintain the initiative throughout the campaign. He also notes the remarkable (if not always perfect) working relationship that Lee maintained with his two principle subordinates, Longstreet and Jackson. However, Hartwig believes that Lee asked too much of his army in this campaign, and that the straggling that resulted could have led to disaster. He also questions Lee's understanding of the condition of his army, and notes that Lee's stand along the banks of Antietam Creek was a useless and unwise risk.

Throughout the book, the reader comes to understand that the Maryland Campaign represented a turning point in the war in more ways than one. The first phase of the war, Hartwig argues, ended on the night of September 16th. After that night, the possibility of a negotiated settlement, with slavery in tact, died. He also argues that the Battle of Antietam marked the end of the idealism of the war for the soldiers who fought there. This is best summed up in a great passage on page 514:


As McClellan and his large staff swept down the turnpike, the soldiers who filled the sides of the road leaped to their feet and cheered him wildly. "Such a magnificent reception was worth living for," wrote Palfrey. On September 15, 1862, the Army of the Potomac still retained some of the innocence and enthusiastic ideals of 1861, and South Mountain upheld the boundless confidence they placed in McClellan. That September afternoon's victory still danced gloriously in the air, the end seemed in sight, and the man who, in their eyes, had delivered this all was riding to the front, waving his hat and brimming with confidence. But they would never cheer him again with the feeling they did that day. What would come in the next three days would forever dim their starry-eyed idealism. Most of them would still love McClellan and cheer him when he passed, but the army would mature on the banks of Antietam Creek; they would come to understand that the road ahead would be hard and bloody, and that their beloved general might not be the man they would follow to ultimate victory.

If you haven't read this book, and you are interested in the Maryland Campaign, it's a must read. I look forward to volume two, I think it will be worth the wait.
Posted by Steve L at 9:21 PM