Was Lee Committed to Virginia more than the Confederacy? 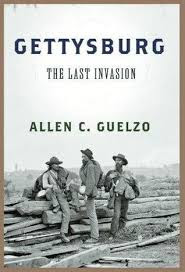 I picked up Allen C. Guelzo's new book, The Last Invasion, from the library yesterday, and spent some time this afternoon diving in. I have heard many things about the book, and I am anxious to read some of Professor Guelzo's more unique interpretations. Many would question the need for yet another full length study of the Gettysburg Campaign, but in reading the first fifty pages or so it seems like this book is set up to offer something new. When I finish, I will post a review comparing it to some of my favorite full length campaign studies.

But as I read along, I thought I would toss out some interest passages here and there and open it up for discussion. I came across my first discussion point fairly quickly. In describing Lee's opposition to sending reinforcements west, Professor Guelzo argues:


Robert E. Lee had thrown away a lifelong career, thrown away, in fact, an oath sworn on his honor, for the sake of Virginia and all of the Virginians like his Carter cousins--"my relatives, my children, my home." Virginia was his all, and Virginia's success was the only hope he had of recouping all he had ventured for the Old Dominion's sake. What he would not give up for Winfield Scott and Abraham Lincoln, he was certainly not going to endanger for the sake of Jefferson Davis and James A. Seddon. "Save in defense of my native State, I never desire again to draw my sword"--those words, which Lee wrote to Scott back in the springtime of the war, had as much application to the Richmond government as to Winfield Scott.