A Brief Stop in Auburn 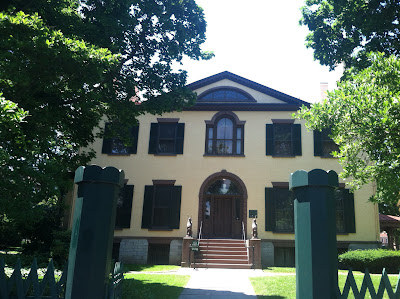 This past weekend I traveled to Buffalo for a wedding. The return trip on Sunday afternoon included a detour to Auburn to visit the house of William H. Seward, famed New York politician and Secretary of State under Abraham Lincoln and Andrew Johnson. I don't think historians have ever truly relegated Seward to the shadows, but in recent years there has been a bit of a renaissance of scholarship, including Dorris Kearns Goodwin's Team of Rivals, and just last year, Walter Starh's biography, Seward: Lincoln's Indispensable Man. The Seward House has had its fair share of attention recently as well, most of it stemming from the controversy surrounding an original Thomas Cole painting that once had a prominent place on the first floor.

The house was built in 1816 by Elijah Miller, Seward's future father-in-law. When William married Frances Seward, her father consented on the condition that the couple would continue to reside at the house. William called this place home for the rest of his life, though he was absent from it frequently and for long stretches of time. During his political career Seward traveled the world and rented homes in Albany and in Washington, but his home in Auburn was the only one he ever owned. For her part, Frances Seward rarely left Auburn, choosing to remain there rather than joining her husband in Washington.

If you are ever traveling through this area of New York State, this house tour is worth allocating a few hours. The visitor experience at the Seward House mirrors traditional historic house tours. Aside from a few areas, the house is only open to tours guided by museum staff and volunteers. We arrived  a bit after 1:00 p.m., and had some time to kill before the next tour of the house began at 2. We headed down to the basement of the house where a small but extremely well-done panel exhibit told the story of the Seward Family and the Underground Railroad. Seward cultivated a national reputation through the 1850s as one of the preeminent antislavery voices in the Senate, but less well known is that Seward backed up his rhetoric with action. Despite significant political risk, solid evidence reveals that the Seward family assisted fugitive slaves seeking to escape to Canada, and harbored at least two fugitives in their home at Auburn. Seward also sold property in town to Harriet Tubman. The exhibit also discussed the rest of the Seward family's positions on slavery, particularly his wife Frances and daughter Fanny. Frances, raised as a Quaker and educated at Emma Willard in Troy, New York, was even more radical than her husband when it came to slavery.

At two, our tour began, and a college student from Washington College in Maryland led us through the various rooms of the house, beginning on the first floor with the drawing room, library, and an expansive dining room. Recounting Seward's status as an excellent host, it was easy to imagine the dining room filled with cigar smoke and tumblers of brandy while Seward cultivated important political connections. The house is filled with an amazing collection of Seward family artifacts. Many of these pieces are original to the home, but many more also came from Seward's home in Washington. Included are several original portraits and other paintings created by Emanuel Leutze, a friend of the family, and the painter of "Washington Crossing the Delaware." 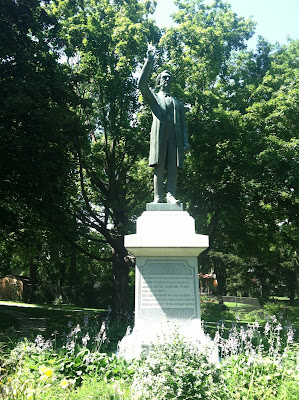 The second floor of the home included several period bedrooms, and two rooms set up to display various family artifacts, one room called "The Alaska Room," the other called "The Civil War Room." Some of the incredible items featured in the Civil War Room included uniforms worn by Seward's sons during the Civil War, the New York State flag carried by William H. Seward Jr.'s regiment, the 9th New York Heavy Artillery, portions of the bloody sheet from Lewis Powell's assassination attempt, and pressed flowers from Abraham Lincoln's coffin, given to Seward by Mary Todd Lincoln. Meanwhile, the Alaska Room contained several masks related to the native cultures of Alaska, and a gold ring, one of only five made from the golden spike that connected the Transcontinental Railroad.

The hallway of the second floor also contained a very unique feature. In this space Seward himself numbered and hung nearly two hundred portraits of noteworthy individuals. I believe the guide said that Seward had personally met all but two of those pictured. Lincoln's portrait Seward hung as number 66. Significantly, Seward hung his own portrait as 66 1/2, a symbol of how close the two became, or perhaps how close Seward came to the Presidency in 1860.

This stately home tucked away in upstate New York contains some incredible treasures related to one of the most significant political figures of the 19th Century. If you happen to be in the area, it's well worth a visit.
Posted by Steve L at 7:45 AM