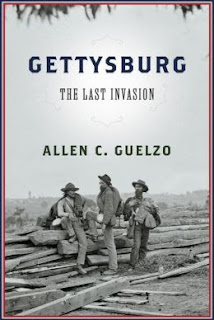 By Allen C. Geulzo
Published in 2013 by Alfred A. Knopf

It is hard to imagine a more written about topic in American History than Gettysburg. Thousands of authors have tried their hand at telling the story of the battle. When examining the historiography, several notable works always rise to the top of any discussion. Edwin Coddington's The Gettysburg Campaign: A Study in Command, first published in 1968, has earned its reputation as the gold standard for full-length campaign studies. More recently, authors Stephen W. Sears and Noah Andre Trudeau have added their own campaign studies. No one can challenge the lofty place that Harry W. Pfanz has carved out in the Gettysburg canon with his works, Gettysburg: The Second Day, Gettysburg: Culp's and Cemetery Hill, and Gettysburg: The First Day. Meanwhile, William Frassanito's groundbreaking works Gettysburg: A Journey in Time and Early Photography at Gettysburg also deserve special mention for their uniqueness, and Thomas Desjardin's These Honored Dead: How the Story of Gettysburg Shaped American Memory is a must for any battlefield buff who wants to understand how the story of Gettysburg developed in American memory. This year, Allen C. Guelzo has added another to the lengthy list of works with Gettysburg: The Last Invasion. Yet Guelzo's account of the battle is unique enough to warrant its addition to an already crowded reading list.

The Gettysburg scholar will find a good deal to like in this book, a fair amount to quibble with, and a lot of food for thought. Guelzo does not shy away from challenging standard interpretations of the battle, and of Civil War combat in general. His discussion of 19th-century tactics, and his knowledge of European warfare, adds a great deal to our understanding of how the Civil War was fought. He argues:


What ran up the Civil War's enormous casualty lists was not expert marksmanship or highly refined weapons, but the inability of poorly trained officers to get their poorly trained soldiers to charge forward and send the enemy flying before the bayonet, instead of standing up and blazing away for an hour or two in close-range firefights where the sheer volume of lead in the air killed enough people to be noticed.

At points in this book, Guelzo gives the reader very vivid depictions of Civil War combat. I also found his overall assessment of the battle's key moments and players well done. Guelzo argues convincingly that General James Longstreet performed admirably in his evening attack on July 2nd, noting that as Old Pete's attack wound down that evening and A.P. Hill's divisions took over, Longstreet had done enough to believe that "the battle should have, before the passage of another hour and a half and the fall of darkness, been over." Guelzo goes on to describe the assault on East Cemetery Hill, and Robert Rodes' decision not to attack the western side, as the key moment on July 2nd. "Subtract Carroll's brigade and add even a token assault by Rodes," he writes, "and Jubal Early would have been within inches and minutes of pulling down the center pole of the Army of the Potomac."

Guelzo also brings a keen eye to the political attitudes of the officers in both armies. In this he follows the model of Richard Slotkin's The Long Road to Antietam, published in 2012. Guelzo outlines the divisions in the Army of the Potomac, pitting the "McClellanites" - Democrats favoring a limited war - against the Abolitionist wing of the army. He argues that political motives stood behind many military choices made during the campaign. He also draws notice to officers within the Army of Northern Virginia overlooked for promotion and greater responsibility because of their lukewarm feelings toward secession and slavery.

This focus on politics adds a valuable dimension to our understanding of both armies. Yet in some cases I believe Guelzo, like Slotkin, falls into the trap of over-emphasizing politics. In describing George Meade's decision to send Winfield Scott Hancock to Gettysburg to assume command on the evening of July 1st, Guelzo writes: "He 'must have a man who he knew and could trust,' someone who could make a politically reliable estimate of the situation, and not some wild-eyed call to an abolitionist suicide-ride." While politics may have played a role in Meade's respective feelings toward Hancock and Howard, there were many logical justifications for sending Hancock to the field that had nothing to do with political intrigue.

Guelzo makes his low esteem for General Meade obvious from the beginning of the book. He views the Army of the Potomac commander as something of a miniature George McClellan, who lucked into victory at the Battle of Gettysburg in part because of a willingness of subordinates to disregard orders. Some of Guelzo's arguments are well made. He convincingly argues that John Reynolds forced Meade's hand on July 1st intentionally, desiring to save his home state from invasion rather than retreating to Pipe Creek and leaving Pennsylvania in Confederate hands. Other interpretations are based on a healthy use of questionable sources and odd readings of well-established accounts. Most controversially perhaps, Guelzo tries to revive the charge leveled at Meade by Sickles and Butterfield: that he wanted to retreat on the evening of July 2nd, and was only stayed by the iron resolve of his corps commanders to fight it out. He attempts to disqualify on-the-record statements denying Meade's intention to retreat given by four members present at the council of war on a technicality of language. He then utilizes a fair amount of evidence provided Butterfield, and by Abner Doubleday, two men with well established grudges against Meade, one of whom who wasn't even at the council. Other bits of information Guelzo provides to support his argument are also from questionable sources. Toward the end of the book, Guelzo revisits the controversy, and cites a cryptic statement from General Henry Slocum. "I have in my possession a small scrap of paper three or four inches long... that would throw a flood of light on the battle of Gettysburg," Slocum wrote, presumably referring to the controversy over Meade's willingness to retreat. Unfortunately, Guelzo laments, the paper never saw the light of day. It would have been logical for Meade to consider retreat as a potential option after July 2nd, and evidence does indicate that the thought was up for discussion. Yet I think Guelzo's case - that Meade had decided the matter and was essentially overruled by his corps commanders - is very weak. I also believe that in other areas the book criticizes Meade unfairly, and fails to give credit to the general where it is due.

There are a few, more minor, annoyances contained within the book. It lacks a bibliography, which makes tracking down various sources found in the notes difficult, especially when they are abbreviated. The maps for the book are not great - and on several occasions contain errors. One map showing De Trobriand's brigade in the Wheatfield shows the 3rd Michigan in the position where the 5th Michigan should be, and lists the 17th Maine incorrectly as the 7th Maine. Likely, these faults lie with the publisher. A reader looking for a highly detailed tactical account of the battle will be disappointed. Certain actions receive minimal attention, and in a few places, the chronology of battle action seems confused, or perhaps reinterpreted. These minor grievances do not hurt the overall value of the book.

Overall, the book is a worthy read for those interested in Gettysburg. I would not place it on par with the works of Edwin Coddington and Harry Pfanz, but Guelzo has carved out a unique viewpoint on the Battle of Gettysburg, which Gettysburg buffs should at least be exposed to, even if they don't totally buy his arguments.
Posted by Steve L at 9:43 AM