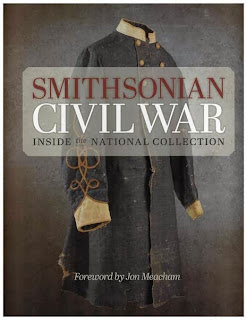 As the Holidays come to a close, I've spent some time this weekend exploring one of my most welcome gifts - Smithsonian Civil War: Inside the National Collection. Published at the end of 2013 by the Smithsonian Institution and edited by Neil Kagan and Stephen G. Hyslop, this coffee table book highlights 150 Smithsonian artifacts (or artifact sets) related to the Civil War.

The book features nearly four hundred big, glossy pages, filled with high quality photographs and images. An explanatory caption accompanies each artifact, and all 150 entries contain a brief essay, similar to an interpretive label in a museum. The book, as Michelle Delaney writes in its introduction, is "an exhibit between hard covers," designed to trace the full course of a national tragedy - from the growing divide on slavery through Reconstruction and the war's memory - using the best pieces from our national collection.

I'm impressed by the diversity of the material culture on display. This book is far more than a collection of guns, swords, and uniforms. The artifacts tell the story of the Civil War with broad strokes, encompassing the topics of slavery, abolitionism, politics, the armies, the homefront, women at war, technology, and many more. Just like a museum exhibit, the book invites browsing and careful reading alike, and I've done a bit of both.

So far I've sat down and carefully read through about a quarter of the book, and already I've come across several powerful artifacts that could serve as centerpieces in any exhibit exploring the Civil War.  Two powerful pieces stand out. First, a blood-stained map of the Mississippi River Basin from the collection of the National Museum of African American History and Culture. The map was found on the body of David Starr Hoyt, an abolitionist murdered by pro-slavery forces outside of Lawrence, Kansas in 1856. 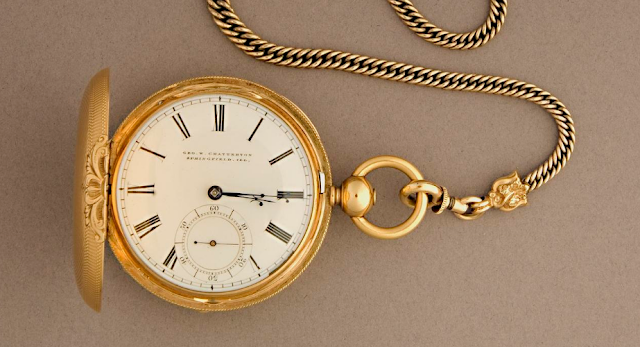 The second artifact that really spoke to me was Abraham Lincoln's gold pocket watch. Lincoln purchased the watch in the late 1850s, and sent his watch to M.W. Galt & Company for repairs when he arrived in Washington in 1861. His watch changed forever when news of the bombardment of Fort Sumter arrived in the city on April 13, 1861. Jonathan Dillon, the watchmaker repairing the watch at that time, decided on that day to inscribe a message on the inner workings of the watch with a sharp metal instrument. He recorded the news of Fort Sumter, set down his name and the date, and wrote "thank God we have a government." Through the years, other watchmakers who had the opportunity to view the inner workings of Mr. Lincoln's watch also added their own inscriptions, including one who wrote "Jeff Davis." Lincoln probably never knew of the secret messages inside his pocket watch. Incredibly, the story of the messages inside the watch was passed down through Dillon's family over the years. Staff at the National Museum of American History never had any cause to uncover the inner workings of the watch, and knew nothing of Dillon's story. In 2009, descendents of Dillon contacted the Smithsonian about the watch, and on March 10, 2009, the inscriptions were revealed to Dillon's family, reporters, and museum staff.

These are just two of an array of incredible pieces from the National Collection highlighted. If you are like me, and you appreciate the power objects have to convey meaningful stories, you will enjoy this book.
Posted by Steve L at 10:56 AM