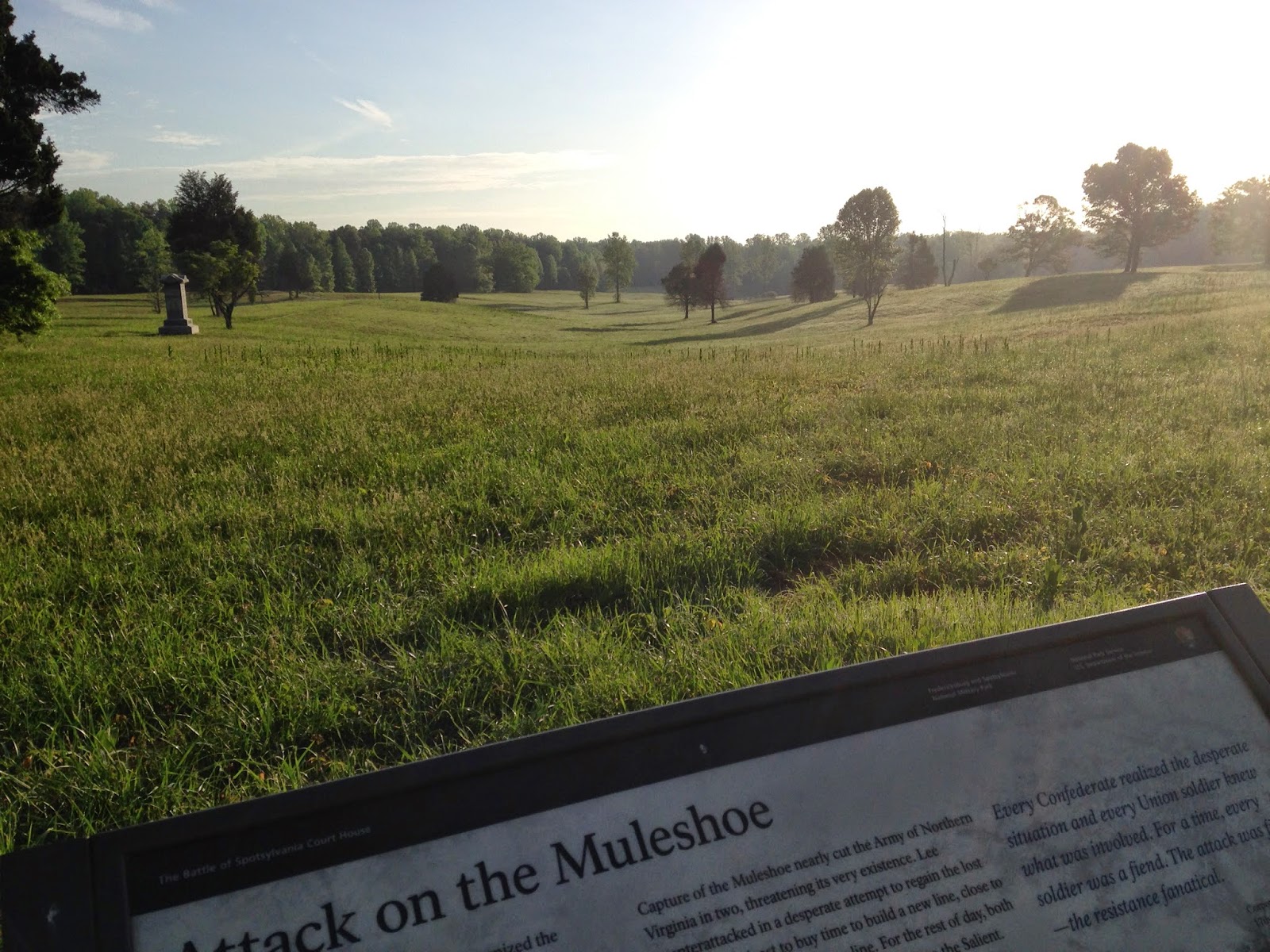 Today we commemorate one of the most horrific days in American history. At about 4:30 a.m. on May 12th, 1864, the Army of the Potomac launched 20,000 men in a massed assault against the protruding salient--"The Mule Shoe"--of the Army of Northern Virginia's defensive line at Spotsylvania. On a foggy, rain soaked morning - the initial assault wave swept over the Confederate line, capturing several batteries of artillery and a good part of an entire Confederate division. With the center of his lines broken, Robert E. Lee gathered whatever forces he could find and launched counterattacks against the Mule Shoe, hoping to buy time to construct a second defensive line at the base of the salient. Both sides fed more troops into the fight, which settled down into a bloody stalemate. For almost twenty-two hours, until early in the morning on May 13th, the two sides battled each other at point-blank range, frequently in hand-to-hand combat. In some places the battle lines were only separated by four-feet wide earthworks that ran between them. As they fought, torrential rains turned the bloody landscape into a quagmire. After the battle Meade's aide Theodore Lyman recalled:


At one place called the "Corner" [the Bloody Angle] the lines stood within fifty feet of each other, for hours! The breastworks made a ridge between them, and any living thing that showed above that line fell dead. The next day the bodies of friend and foe covered the ground. Some wounded men were then taken out from under three or four dead ones. One body, that lay exposed to the fire, had eighty bullets in it.

All told, the two sides suffered a total of 17,000 casualties on May 12th, most in the localized area of the Mule Shoe, making it perhaps the bloodiest piece of real estate in America. In 1864, the attack on the Mule Shoe revealed that a war that had already seen its share of carnage was becoming--if possible--more brutal.

At 5 a.m. this morning--May 12, 2014--some 235 individuals congregated on the Spotsylvania Battlefield to commemorate this horrific scene. Led by Fredericksburg and Spotsylvania National Military Park's superb park rangers, we filed down Landrum Lane to the location of the Confederate picket line, and began to trace the footsteps of the Union 2nd Corps's assault. Our ranger guides shared with us the accounts of the Union soldiers who took part in the assault - recounting their agonizing night march to get into position, and utilizing the soldiers own words to depict the hellish scenes of that morning. Suddenly, I didn't think waking up at 3 a.m. to attend this hike was such an impressive accomplishment anymore. 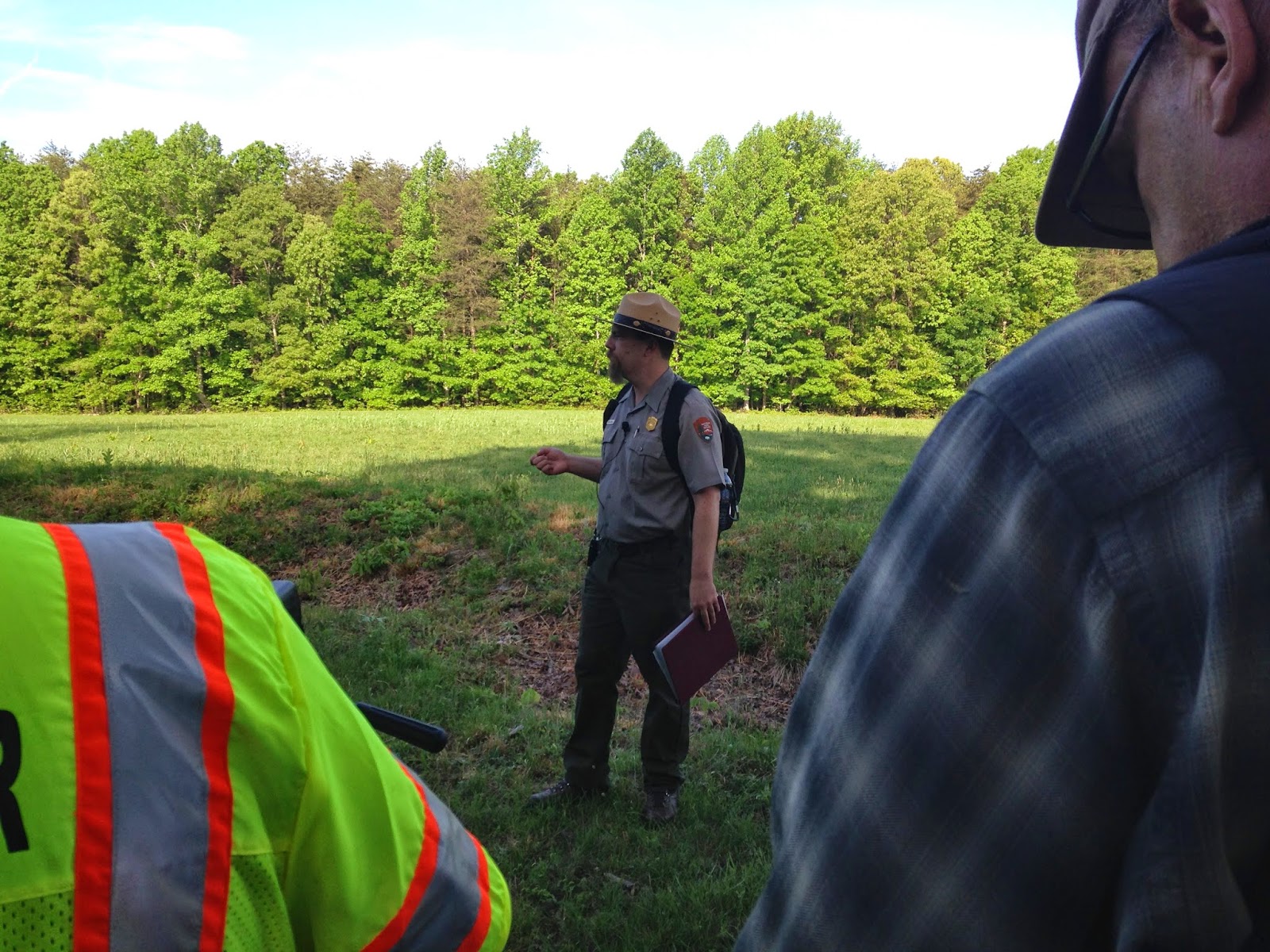 The first interpretive hike ended at 7 a.m., and a second program--with even more visitors--began an hour later, tracing the course of Robert E. Lee's response to the crisis in the center of his line. We followed in the footsteps of the troops Lee fed into the Mule Shoe, and began understand how the decisions of commanders on both sides, and the unique features of the terrain, led to the bloody stalemate. And to contemplate the iron will and determination of the soldiers who sustained it.

While I was unable to stay, the Park Service had planned interpretive programs continuing all day long. Their commemorative efforts go beyond studying the strategy and tactics of the battle. Several programs and events contemplated the human cost of war. During the Park's "A Nation Remembers" culminating event on May 10th, flowers were strewed across the earthworks that still stand the test of time at the Bloody Angle.

Beginning at 6 a.m. this morning - Park Rangers stood as silent sentinels at the Bloody Angle with the National Colors, a tribute to the sacrifices of the soldiers. Rangers were each taking 30 minute shifts, and their tribute will last the full 22 hours of the battle, until 4 a.m. tomorrow morning. And finally, tonight, from 8 p.m. to 9 p.m. there will be a candlelight vigil to reflect on the destruction of the battle.
Posted by Steve L at 4:45 PM