Winter Around the Capital

Tonight I had a little fun browsing Civil War photographs on the Library of Congress website, which I do from time to time. Here's an interesting albumen print depicting the 2nd Maine Infantry drilling over a wintry landscape. Viewed at a high resolution (which you can download here), the image yields a number of interesting details. 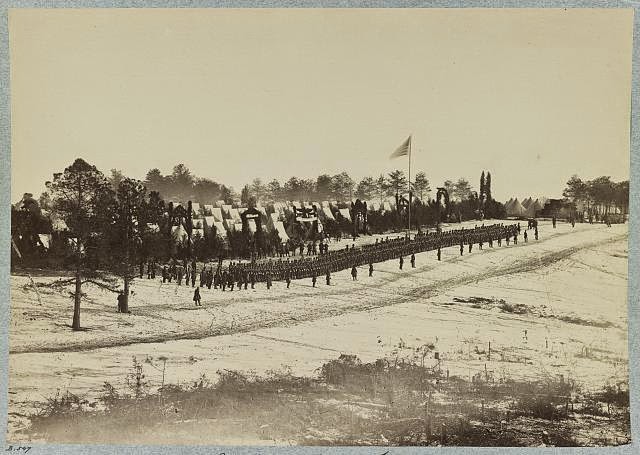 First - the presence of Sibley tents confirm that this photograph was taken in the winter of 1861-1862, as they were not generally used later in the war. 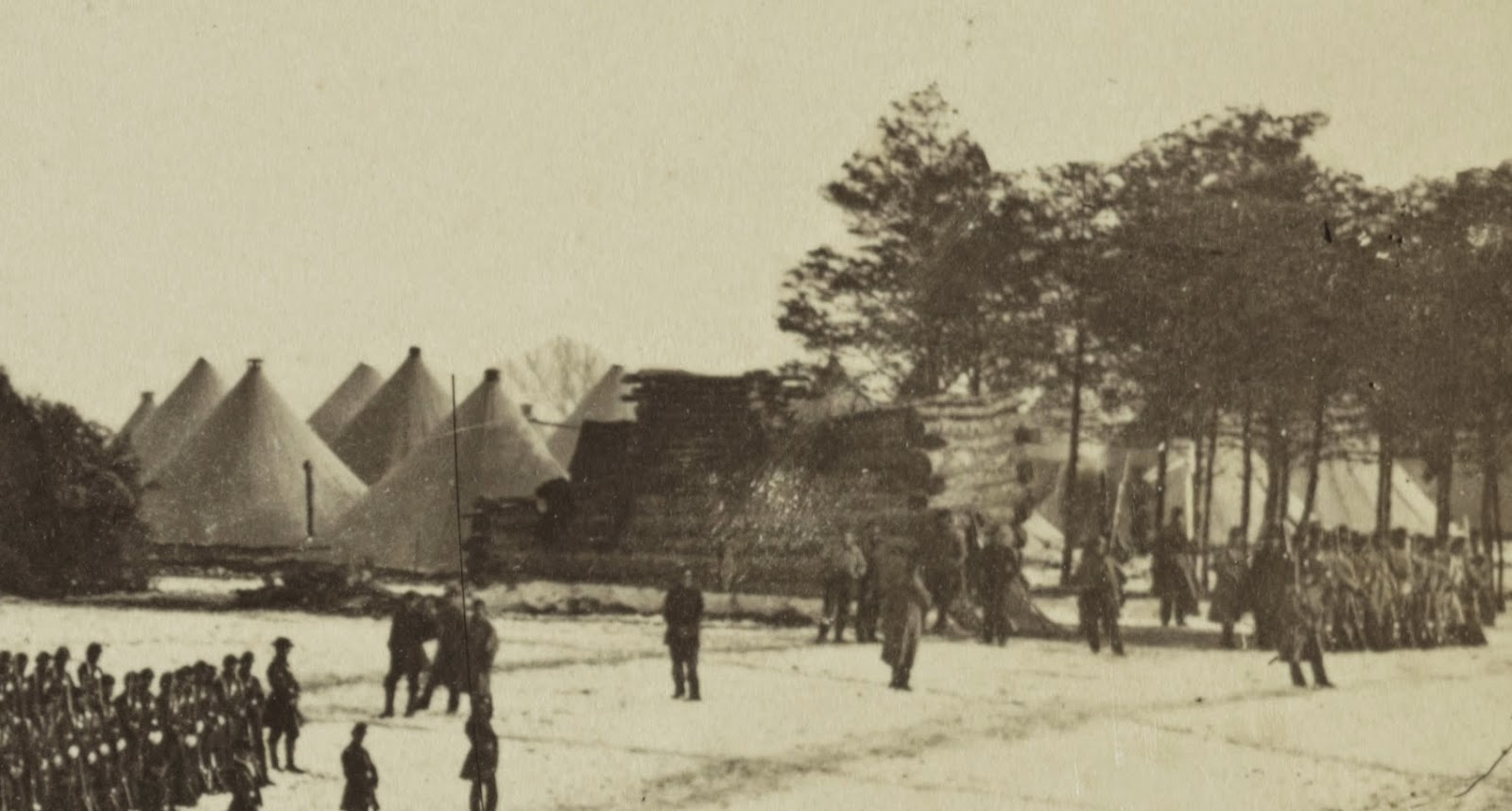 The layout and built environment of the camp - including evergreen boughs and festive arches arranged amongst the tents, several log structures, and large banners hung reading "2nd Maine" and what appears to be "Camp Jameson" - suggests that the 2nd Maine had inhabited this location for some time. 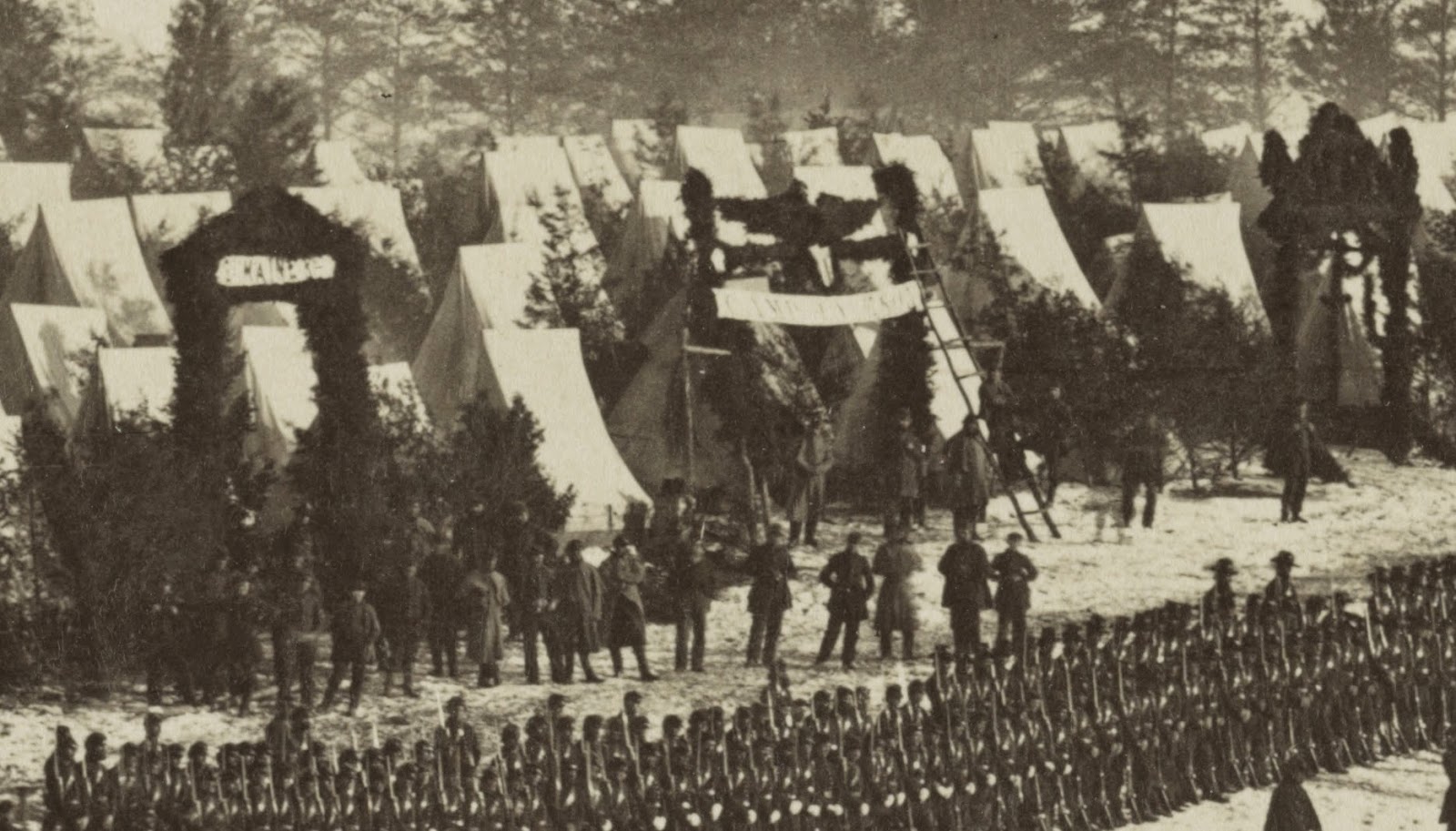 This photograph appears in volume one of Francis Miller's The Photographic History of the Civil War. The caption for the photograph in part reads:


This picture shows the Christmas Day parade of the Second Maine Infantry at Camp James near Washington, 1861.

Despite this caption, I am inclined to believe that this image was not captured on Christmas Day, but certainly sometime around Christmas. Searching for weather conditions around the capital in December of 1861, I found the diary of Horatio Nelson Taft, a Patent Office examiner, on the Library of Congress website. Taft's diary reveals weather above freezing and no snow on Christmas Day 1861, and nothing that would create a snow covered field in the days leading up to Christmas. Taft reported snow on December 23rd, but, in his own words, "not enough to remain on the ground." Taft's account does indicate snow during the first week of January, 1862. He reports extremely cold weather and a light covering of snow on the ground. Perhaps the photograph was captured at that time.

Further evidence supporting a photograph date close to Christmas is derived from Maine In the War for the Union by William E.S. Whitman and Charles H. True. This book, published in 1865, provides details of the 2nd Maine's winter encampment at Camp Jameson on Hall's Hill in Arlington, Virginia, within sight of the United States Capitol. The description reads:


The men while at this post took great pains to make their quarters neat and comfortable, and they were models in this respect which were not surpassed. At Christmas the encampment was decorated with evergreens, arches and other ornaments, and presented a very picturesque appearance.

Either way, a fascinating image of a full Civil War regiment early in the war. The 2nd Maine served two years with the Army of the Potomac, returning home after the Battle of Chancellorsville. Many of the regiment's men who enlisted for three years instead of two famously served in the 20th Maine after the regiment disbanded.
Posted by Steve L at 10:36 PM