The Iron Brigade: A Military History
By Alan T. Nolan
Published 1983 (First Edition 1961) by the Historical Society of Michigan 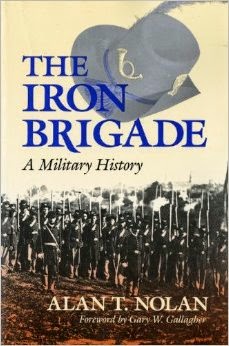 Over the past few years, I've developed quite an interest in the Iron Brigade. My curiosity in the Army of the Potomac's elite Westerners first began when I waded into Alan D. Gaff's On Many a Bloody Field: Four Years in the Iron Brigade, an excellent and exhaustive study of Company B, 19th Indiana. Gettysburg National Military Park's now-retired supervisory historian Scott Hartwig continued to fan those flames of curiosity. At Gettysburg's Sesquicentennial in July of 2013, I attended his excellent interpretive program entitled "The Last March of the Iron Brigade." While retracing the steps of the brigade, Hartwig spoke of his favorite war recollection, Service with the Sixth Wisconsin Volunteers by Rufus Dawes. On this recommendation, I later picked up Dawes's amazing account, and it didn't disappoint.

As my interest developed, I became keenly aware of a glaring gap in my knowledge of Iron Brigade (not to mention general Civil War) historiography: I had not yet picked up the late Alan T. Nolan's classic, The Iron Brigade: A Military History. I rectified this situation late last year, when I found a copy for sale at my favorite used book store, and I snapped it up. Finally, over Christmas, I buried my nose into Nolan's descriptive accounts of the standup fight at the Brawner Farm, of the horrific morning along the Hagerstown Pike at Antietam, and of the brigade's "last stand" at the hastily built barricade on Seminary Ridge at Gettysburg.

For a book that first appeared in 1961, it has withstood the test of time. Nolan's treatment of this famed brigade is comprehensive and complex. Rather than obsessing over the minutiae of battlefield tactics and maneuvers, the author's success lies in his ability to make his story a human drama. Through the book I came to know the men, and especially the officers, of the 2nd, 6th, and 7th Wisconsin, the 19th Indiana, and the 24th Michigan. I learned about their home towns and their motivations for fighting. I contemplated their thoughts on Union and emancipation, and began to understand the importance of politics and political connections in army life. I read about the daily experiences of soldiers in camp and on campaign, and recognized how discipline, rewards and punishments, and unit pride all contributed to the brigade's development into one of the best fighting forces of the war. In thoroughly acquainting his readers with the officers and soldiers of the Iron Brigade first, Nolan lent more power to his account when he brought them to the battlefield.

It would be difficult to find a unit anywhere with a more impressive combat record than the Iron Brigade. During the war, Confederate regiments that faced the brigade in the field without exception suffered astounding casualties. Correspondingly, the Iron Brigade lost a higher percentage of soldiers killed in combat than any other Federal unit. At Gettysburg, the westerners left nearly two-thirds of their number on the field, the greatest proportion of Union casualties in the war's largest battle.

In total, Alan Nolan's The Iron Brigade continues to serve as a model for a comprehensive, modern, unit history. My only regret is that this book wasn't longer. Nolan chose to essentially wrap his book up after Gettysburg, noting that battle casualties, expiring enlistments, and army reorganization destroyed the original fabric of the brigade. He summarized the record of the brigade between Gettysburg and Appomattox with a short epilogue chapter. While I understand why Nolan made this choice, the post-Gettysburg period of the brigade's history is one that I think is worthy of a more expansive study. I found myself wanting to know more about how the soldiers of the brigade coped with the increasing stresses of combat fatigue, the uncertainty of fighting alongside new recruits and draftees of unknown quality, and the challenges to morale when external forces disrupted unit cohesion and pride. This one critique aside, I would recommend this highly readable account as one of the very best unit histories that I've read.

I also note that, though scholarship is always evolving and improving, the popular history and popular culture related to the Civil War even today tends to focus on political and military leadership at the highest levels, men like Abraham Lincoln, Robert E. Lee, and Ulysses S. Grant. While I recognize the importance of studying their decisions and actions, I have personally become increasingly interested in learning about the war from a lower vantage point: from the view of soldiers and field officers at the regimental and brigade level. And as someone who thoroughly enjoyed HBO's Band of Brothers miniseries, I wonder if and when someone might take on a similar type of project focused on a Civil War unit. While I hesitate to trust Hollywood once again in the telling of a Civil War epic, I can't say I wouldn't be excited to see someone like Tom Hanks and Steven Spielberg bring the story of the Iron Brigade to the big screen. Just a thought.
Posted by Steve L at 10:07 PM