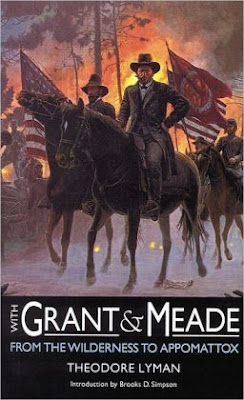 With the passing of the 150th anniversary of the Battle of Gettysburg, I've found myself exploring the war in the east after July 3rd, 1863. For fifteen years, the Gettysburg Campaign has held my attention like no other Civil War story. In this I suppose that I am guilty, like many others, of fixating too much on one battle in a war where one battle rarely had a decisive impact on the eventual outcome. Without getting into a debate over the "true turning point" of the war, I've long believed that the second half of the war gets glossed over far too often, at least in depictions crafted for popular audiences. The war after July 1863 is depicted as a long, slow retreat from Gettysburg to Appomattox. In my mind, nothing could be further from the truth.

The war in 1864 and 1865 has always fascinated me. The confrontation between Grand and Lee has always seemed like the dramatic culmination of an awful tragedy. Like many, I cut my teeth on this story with Shelby Foote and Ken Burns. My first real introduction to the second half of the war in the east came with Gordon Rhea's excellent four volume series on the Overland Campaign, four books that I still rank at the very top of my Civil War reading list. Yet my reading and research on the Overland Campaign, and the subsequent Siege of Petersburg, has never equaled the time I've put into learning about Gettysburg. As the Sesquicentennial moves toward the final two years of the war, I've set a goal to change that a bit.

To start things off, while I was in Gettysburg for the anniversary I picked up With Grant & Meade: From the Wilderness to Appomattox. This book contains letters written by Colonel Theodore Lyman, a volunteer aide to George G. Meade who served from September of 1863 through the end of the war. The letters were selected and edited by George R. Agassiz, and my particular edition contained a brief introduction written by Brooks Simpson. It seemed fitting to me to select a primary source account written by a man who had seen nothing of the war up to Gettysburg first-hand. Lyman was a Harvard-educated Boston Brahmin who had become acquainted with Meade before the war in Florida. Meade was overseeing the construction of lighthouses, while Lyman was researching starfish. Just before the war Lyman and his wife had set out on a tour of European Capitals. When they returned to the States in the summer of 1863, Lyman accepted a position as a volunteer aide to Meade.

If you read anything written about the Army of the Potomac during the second half of the war, you will frequently find passages from Lyman's letters quoted. After reading this book, I understand why. Lyman was an excellent writer with a perceptive eye and a sharp wit. Despite residing firmly within General Meade's close circle, Lyman's letters home to his wife contained frank, honest, and mostly fair assessments of Meade, Grant, Sheridan, and many others. He had an incredible knack for capturing the essence of the great men who oversaw the Union cause with powerful descriptions. Lyman famously wrote that Grant "habitually wears an expression as if he had determined to drive his head through a brick wall, and was about to do it." Here are a few other examples of Lyman's assessments: of Grant he wrote -


He is a man of natural, severe simplicity, in all things--the very way he wears his high-crowned felt hat shows this: he neither puts it on behind his ears, nor draws it over his eyes; much less does he cock it on one side, but sets it straight and very hard on his head. His riding is the same: without the slightest "air," and, per contra, without affectation of homeliness; he sits firmly in the saddle and looks straight ahead, as if only intent on getting to some particular point. General Meade says he is a very amiable, though his eye is stern and almost fierce-looking.


He is like a firework, always going bang at someone, and nobody ever knows who is going to catch it next, but all stand in a semi-terrified state. There is something sardonic in his natural disposition, which is an excellent thing in a commander; it makes people skip round so.

Perhaps my favorite description is of Lincoln:


The President is, I think, the ugliest man I ever put my eyes on; there is also an expression of plebeian vulgarity in his face that is offensive (you recognize the recounter of coarse stories). On the other hand, he has the look of sense and wonderful shrewdness, while the heavy eyelids give him a mark of almost genius. He strikes me, too, as a very honest and kindly man; and, with all his vulgarity, I see no trace of low passions in his face. On the whole, he is such a mixture of all sorts, as only America brings forth. He is much like a highly intellectual and benevolent Satyr as anything I can think of. I never wish to see him again, but, as humanity runs, I am well content to have him at the head of affairs.

These letters provide an excellent look at the inner workings of the Army of the Potomac's high command. Lyman depicted the political divisions within the army. He resented the manner in which politics played such an important role in promotions, and heaped scorn upon Radical Republicans. He had harsh words especially for Secretary of War Edwin Stanton. Yet, Lyman comes across as a moderate, in favor of the prosecution of the war. He grudgingly supported Lincoln for President in 1864, believing the Democratic Platform unacceptable. Lyman also depicted the tense relationships at headquarters. Surprisingly, Lyman does not depict a rocky relationship between Meade and Grant. Though he described moments of tension, he mostly presented a positive working relationship, and often had kind words for Grant. Meade's relationships with other officers seem less functional. Lyman recorded Meade's struggles with his Corps Commanders, particularly G.K. Warren. He also depicted a completely dysfunctional relationship between Meade and Sheridan. At the end of the war, both Meade and his staff greatly resent the credit heaped upon Sheridan.

In Lyman's letters, we are able to see some of the prejudices that existed at Army of the Potomac headquarters. Lyman frequently dismissed the quality of German-born soldiers, and demonstrated a clear disregard for the quality of black soldiers (an irony given the fact that his wife's cousin was Robert Gould Shaw). Yet readers come to understand the incredible qualities of the men of the Army of the Potomac. "These men are wonderful," Lyman wrote in February of 1864:


much more so than the officers. There was a whole division wet to the waist, on a rainy February day, exposed each instant to attack, and yet making little pots of coffee, in the open air, as calmly as if at Revere House.

Lyman also astutely assessed the failures of command in the Army of the Potomac. After the end of the Mine Run Campaign, Lyman summed things up:


And so ends what I think I shall call the Great Seven-days' Flank. If you ask what were the causes of failure, they lie in a nutshell--Slowness and want of Detail. We have fought for two and a half years, but it takes no wiseacre to see that we yet have much to learn. Were it not for the remarkable intelligence of the men, we could not do even as well as we do...

To conclude, With Grant and Meade is a fascinating look at the second half of the war in the east, filled with insightful commentary on the men who guided the Union war effort during the war's final twenty months.
Posted by Steve L at 11:41 AM