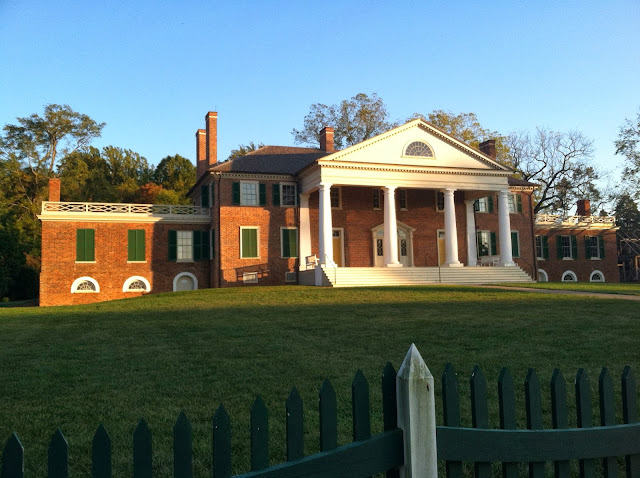 Well, here I am in Virginia. After spending the last seven years in central New York, a five and a half hour drive from the Gettysburg battlefield, I now find myself three hours away, and less than a two hour drive from virtually every major battlefield in the state of Virginia. And just when I arrive, the government shuts down all National Park Service sites, and I find myself unable to take advantage of my new-found proximity.

Of course that's not entirely true. There are many Civil War sites in Virginia not operated by the National Park Service that remain open, as the Emerging Civil War blog has continued to demonstrate throughout the government shutdown. This part of Virginia also boasts a number of other historic sites unrelated to the Civil War. Yesterday - I took some time to explore one of them - James Madison's Montpelier.

Located just outside of Orange, Virginia, Montpelier is set in the foothills of the Blue Ridge Mountains. This property has a unique history. The Madison family owned the estate for more than 120 years, from 1723 until 1844. Ambrose Madison, James's grandfather, first moved to the property with his family and about 29 slaves in 1732, establishing a plantation. James Madison Sr. expanded his father's tobacco plantation, and in the early 1760s he began construction of a new house - today known as Montpelier. His eldest son, James Madison Jr., "the father of the Constitution," inherited the estate, and, despite frequent absences due to his political career, called Montpelier his home throughout his entire life. He died there in 1836. Eight years later, Dolley Madison sold the property.

In 1901 William and Annie Rogers duPont acquired Montpelier, and it remained in the duPont family until Marion duPont Scott bequeathed it to the National Trust for Historic Preservation upon her death in the 1980s. Under the duPonts the estate became a horse farm,  and during this time the home also underwent several dramatic expansions and alterations. Since 2003, the Montpelier Foundation has taken on an ambitious effort to return the home to the way it looked circa 1820 - the years of James Madison's retirement.

My experience began with a short film at the Visitor's Center, introducing the story of James Madison and establishing his importance as the most powerful voice at the Constitutional Convention of 1787. Following the film, I joined about 20 other visitors for a 45-minute guided tour of the house. The furnishings in the house at this point are fairly sparse. With the exterior renovations completed in 2008, the curators at Montpelier are currently in the middle of an on-going effort to research each room of the house to determine how the rooms may have appeared during Madison's time. Some of the rooms are more complete than others, but the historical detective work in itself is a fascinating tale. The guided tour ends in Madison's library on the second floor. Unfurnished at the moment, this room is slated to be restored this winter. Currently, the bare room features one wall with quotes from famous political philosophers juxtaposed with James Madison quotes about the Constitution. It was in this room in the winter of 1786 that Madison spent hours pouring over volumes of political thought in preparation for the upcoming Convention in Philadelphia. As such, it can be said to be the room in which the first outlines of the Constitution began to take shape. The rest of the second floor is devoted currently to a temporary exhibit on the War of 1812.

In addition to the house tour, visitors can explore much more on the estate. Interpretive signage and pathways provide information on the enslaved community at Montpelier, including reconstructed frames of the domestic slave quarters, and markers outlining the field slave quarters and the site of one of Montpelier's slave cemeteries. At any one time, the plantation would have been home to upward of a hundred slaves. The Montpelier Foundation has made extensive use of archeological investigations to learn more about the estate and the people who called it home. These investigations are ongoing, and as I traversed the estate I passed several archeologists at work. Evidence of the duPont era remains as well, including a beautiful terraced garden that you can stroll through, and the horse farm itself. Today, Montpelier maintains a partnership with the Thoroughbred Retirement Foundation, and a portion of the estate operates as a farm for thoroughbred horses. Two race courses still remain, and a steeplechase event is held here every November. The Montpelier Visitor Center also offers several exhibits about Madison, Montpelier, and the duPonts. Unfortunately, I did not have a chance yesterday to check out these exhibits.

Finally, to at least make an attempt to tie this post to the Civil War, I should point out that the estate does have some Civil War history associated with it, though I have yet to exlpore it. In 2002 archeologists located the remains of the winter quarters of General Samuel McGowan's South Carolians during the winter of 1863/1864. McGowans soldiers remained in camp at this location until May 4th, 1864, departing to confront the Army of the Potomac as it crossed the Rapidan River and entered the Wilderness. Today, you can hike Montpelier's Civil War trail, which winds its way to reconstructed huts near where McGowan's men camped. The trail eventually finds its way to the cabin of George Gilmore. Gilmore was born into slavery at Montpelier around 1810. Freed by the 13th Amendment, Gilmore built a cabin at this site from materials scavenged from the desserted Confederate camp. The cabin was restored in 2005 by the Montpelier Foundation to interpret the transition from slavery to freedom that many African Americans faced at the close of the Civil War.

In all, James Madison's Montpelier is certainly worth your time if you have the opportunity to go. The many layers of history at this estate, and the ongoing efforts to uncover those layers, make it much more than a traditional historic house experience. If you can't explore in person, Montpelier also has an excellent smart phone app that allows you to explore digitally.
Posted by Steve L at 3:23 PM

Email ThisBlogThis!Share to TwitterShare to FacebookShare to Pinterest
Labels: Museums