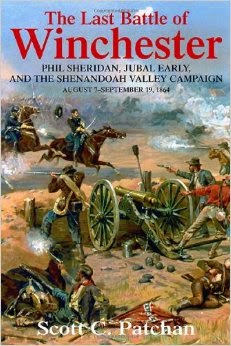 Though silent on the blog for some time now, I've maintained my activity on the reading front. Just this past week, as we commemorated the 150th anniversary of Third Winchester, I finished reading Scott C. Patchan's recent book, The Last Battle of Winchester: Phil Sheridan, Jubal Early, and the Shenandoah Valley Campaign, August 7-September 18, 1864.

I must admit that I had little knowledge of the 1864 Valley Campaign prior to this book. What I knew I had I gleaned off of general Civil War overviews, biographies and memoirs of participants in the campaign, and a handful of visits to sites like New Market and Cedar Creek. Given my sparse knowledge of the topic, this book has been high on my "to read" list for quite some time. When I finally had a chance to pick it up, I wasn't disappointed.

Patchan has produced a fine campaign study, providing his readers with a blow-by-blow account of the Battle of Third Winchester. While he delves into the details of combat and evaluates the performances of key subordinates on both sides, Patchan focuses much of his book on a close analysis of the leadership qualities of the opposing commanders, Phil Sheridan and Jubal Early. He studies their successes and failures, both strategically and operationally.

In Jubal Early, Patchan sees a commander with an excellent combat record, and one who had already seen tremendous success facing long odds as an independent commander in the Valley. And yet, Patchan faults Early for misreading his enemy's intentions in advance of the September 19th battle. Early's daring decision to split his army in the face of overwhelming odds put his troops in unnecessary danger, and suggests that the Rebel commander's disdain for his enemy clouded his judgment.

On the federal side, Patchan provides an excellent analysis of the political implications of the Valley Campaign. While many historians have often portrayed Sheridan as a rash and sometimes reckless commander, Patchan finds that in the fall of 1864, Sheridan acted with commendable patience and prudence. In fact, one could say that Sheridan acted with too much caution. Understanding the charged atmosphere of election-year politics, the Lincoln Administration and Sheridan's boss, Ulysses S. Grant, worried about the ramifications of another defeat in "the Valley of Humiliation." Keenly grasping the political realities of his position, Sheridan spent much of September waiting for his counterpart to detach forces before striking. Once those forces, under command of General Richard Anderson, did leave the valley, Sheridan unleashed his offensive.

Little Phil's battle plan contained several flaws tactically. Patchan points out that the Union general did not take advantage of all the potential avenues of approach for his army on September 19th, slowing his army's advance and forcing it to attack through disadvantageous ground. He also failed to deploy cavalry in positions to effectively protect the flanks of his advancing infantry. And yet, Patchan praises Sheridan's persistence, inspirational battlefield leadership, and his willingness to use the entirety of his army. He highlights all three of these as qualities that defined the Union army's success at Third Winchester, and became a trademark of Sheridan's future successes. In fact, Patchan argues that Sheridan's dramatic ride through the front lines of his advancing army on September 19th not only spurred his soldiers on to victory, but set the stage his army's morale and inspiration at the Battle of Cedar Creek a month later.

Through Patchan's narrative of the Battle of Third Winchester, the abilities of Sheridan's subordinates also shine through. He highlights in particular the performances of George Crook, David Russell (killed on the battlefield), and Emory Upton. Federal cavalry soldiers also star in this book, in particular Wesley Merritt, George Armstrong Custer, and William Averell. Patchan describes the evolution of the cavalry under Sheridan into a powerful strike force capable of standing toe to toe with Confederate infantry. In the end, Patchan argues that the overwhelming superiority of Federal horse soldiers perhaps served as the critical component that spelled the doom of Early's Army of the Valley.

Patchan concludes his book with a strong argument for why the Third Battle of Winchester matters. It was here along the banks of Opequon Creek that the seeds of the defeat of the Confederacy were sown. This battle set the stage for Fisher's Hill and Cedar Creek, and the ultimate destruction of Early's Army. This trio of defeats went a long way toward ensuring Lincoln's reelection. They also closed off the Shenandoah Valley once and for all to the Confederacy, and allowed Sheridan's victorious army to return to the Petersburg front. The following spring, it is forces led by Sheridan, and in particular his powerful mounted strike force, that land the mortal blows to Robert E. Lee's army in March and April of 1865.

Scott Patchan's The Last Battle of Winchester is well written, contains excellent maps, and well-chosen illustrations and photographs throughout. It is well worth your time.
Posted by Steve L at 8:34 PM